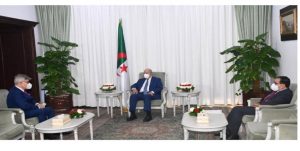 Bilateral relations between the Republic of Algeria and the Russian Federation go back decades, even throughout the Algerian War of Independence, as the Soviet Union was the first country in the world to recognize the interim government of the Algerian Republic in October 1960, then recognized the rule of law on March 23, 1962, establishing diplomatic relations with this African country.

Indeed, the Russian ambassador in Algiers, Igor Beliaev welcomed, this Wednesday in Algiers, the level reached by « the deep strategic partnership » between his country and Algeria. The Russian diplomat paid a visit to the Presidential Palace of El-Mouradia at the end of his mission in Algeria.

At the end of the interview with the Algerian President, Abdelmadjid Tebboune, bilateral relations were discussed. The latter have developed considerably over the past five years and have reached the level of a strategic partnership, in the political and military fields.

“Our two countries attach particular interest to the holding of the tenth session of the Algerian-Russian Joint Commission for Economic, Commercial, Scientific and Technical Cooperation scheduled in Algeria, and we believe that the meeting will boost bilateral cooperation in many areas of development mutual interest” noted the diplomat during his farewell visit at the end of his mission to Algeria.

It should be recalled that Russia, despite the Western sanctions imposed for its military operation in Ukraine, continues to make progress in Africa, by recently signing bilateral and trade agreements with African countries. In this context, the Special Representative of the Russian Presidency for the Middle East and Africa, Mikhail Bogdanov, said on June 02, 2022 that Africa has always been an important region for Russia from a political point of view. foreign affairs, trade, economic and humanitarian cooperation.

Mr. Bogdanov also pointed out that many Africans studied in Russian universities between the fifties and sixties of the last century, expressing his hope to see many Russian companies operating in Africa. It should be noted that Russia supports many African countries in their struggle for independence, and this is the basis for restoring relations between Russia and Africa.

Recently, another African state has taken the direction of Moscow: Mali has relaunched a partnership with Russia which has brought positive results in the fight against terrorism and the restoration of security in the territory after the end of cooperation with the former colonial power. The latter has been massively criticized because of its ineffectiveness in the fight against armed groups for many years.

In April 2022, Cameroon also signed a strategic military agreement with Russia, becoming the first African country to do so since the start of Russian military operations in Ukraine.

Russia’s engagement today in West Africa seems to be part of a strategy to reactivate an existing historical link with these African countries. The countries of the continent saw this partnership as a means of freeing themselves from French imperialism.