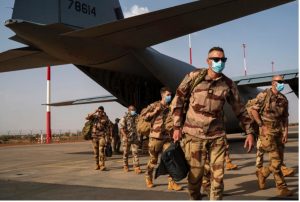 French soldiers have been actively leaving Mali since recently. General Laurent Michon, commander of the « Barkhane » operation, announced that the French armed forces are expected to withdraw completely from Mali at the end of the summer, adding that about 2,500 French soldiers will remain in the Sahel at the end of the operation. It is known that Niger has been chosen as the new site for the redeployment of foreign forces. The pan-Africanist community has criticized this decision as well as the country’s president, Mohamed Bazoum, who is accused of complicity with France and its Western allies. The question must be asked: is France’s choice guided by a benevolent attitude on the part of Mr. Bazoum or by ulterior motives?

It should be noted that France’s presence in Niger is not limited to the military interests of the former metropole. It is well known that French companies that exploit uranium are located in the country. Uranium is an essential resource for the operation of the French nuclear industry. In return, the presence of French soldiers guarantees the security of Paris’ economic interests. In addition, instability and the threat of terrorism make it much easier to extract natural resources from African countries. France has long been criticized for stealing gold from Mali. Of course, the Elysee Palace denies these allegations, but then how can it be explained that France ranks 4th in the world in gold reserves, when France itself does not own a single gold mine. Where does France’s gold come from?

France’s obsession with the wealth of its former colonies raises the question of whether the fight against terrorism is the main reason for the military presence of foreign soldiers on African soil. During the nine years of operations « Serval » and « Barkhane », the French military has not achieved results in the fight against terrorism; on the contrary, terrorist attacks in Mali and the Sahel have only increased. At the same time, the quantities of gold and uranium leaving Mali and Niger have probably not decreased.

No doubt, France’s diplomatic and military defeat in Mali will force Paris to reconsider its strategy in the Sahel. But it is reasonable to assume that France will try to resist its withdrawal from Niger and intends to stay there for a long time.