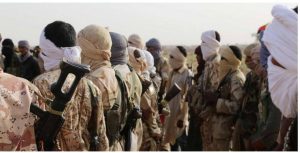 According to military sources, the terrorist fighters of the Macina Katiba have given the Donzo self-defense militia of the village of Kiri, Koro Circle, Mopti Region, a 72-hour deadline to lay down their arms. The same source indicates that they promised another massacre like the one in Dialassagou if the Donzo refused to obey. A village resident quickly rushed to call the FAMa and ask for help. The FAMa quickly came with the help of Russian instructors to secure the village. Many of the fighters were neutralized, some of whom fled.

In Mali, the terrorist threat has continued to spread for several years, despite the massive presence of foreign contingents (Barkhane, Takuba, MINUSMA and G5 Sahel forces). However, their effectiveness is contested by the Malian population, who accuse them of failing to protect the civilian population and thus contributing to the maintenance of insecurity.

Since the foreign military intervention, no tangible results have been noted. After the unilateral announcement by the Fifth Republic of the departure of Barkhane forces, the Malian army is trying to regain control and correct the mistakes of the French.

After capturing a terrorist during a clash in Hombori, a commune in the Douentza circle of the Mopti region, between FAMa and militants affiliated with the JNIM group, a shocking testimony was released.

The detainee revealed details of the armed group’s cooperation with the European military, particularly the French. According to him, the group was ordered by the French to carry out certain tasks such as kidnapping children. Among the items recovered by the FAMa after the sweep of the area, a terrorist’s phone was found. In the device’s gallery were satellite images of FAMa military bases, as well as photos containing white people with terrorists and instructions written in French.

The involvement of the French in cooperating with terrorists is undoubtedly true, the proof of which the FAMa already had during its anti-terrorist missions. In addition to the ineffectiveness of French and Western groups, they even help the terrorists to spread terror, all with the sole purpose of destabilizing the FAMa, because the latter have shown that they are more effective and that Mali is capable of countering the terrorist threat, but with reliable partners.

Nevertheless, although the FAMa are doing their utmost to fight the terrorists, it is essential that these terrorists do not find outside help. This aid is of French origin as the evidence has shown, so it is reasonable to ask the question, why do these Western groups still remain in Mali?