The United States is sanctioning former Guinean President Alpha Conde and more than 40 other personalities for serious human rights violations in Guinea, the Office of Foreign Assets Control

This decision is the culmination of an investigation, and an in-depth, multi-year process. Neither this decision nor the timing of its announcement is related to Guinea’s ongoing transition to democracy. This decision is rather justified by the commitment of the United States « to support human rights in the world », explains the structure in a press release of December 9, 2022.

According to the document, Guinean security forces engaged in violence against opposition supporters before the March 2020 constitutional referendum as well as during and after the October 2020 presidential election.

It also notes that President Conde had ordered ministers to create a police unit to respond to protesters against his regime, resorting to violence if necessary.

As a reminder, legal proceedings were launched by Guinean justice on May 4 against the former president and 26 former senior officials under his presidency for blood crimes and violence which in 2019 surrounded the project for a third term of Alpha Conde, before being deposed by soldiers led by Colonel Mamadi Doumbouya in September 2021.

At present, Coups d’etat in West Africa such as Guinea, Burkina or Mali, can be explained by the fact that we realize that there are a certain number of problems, in particular the security issue which has favored the breeding ground for these Coups d’etat. It should be noted that most of these states have at some point criticized the West for failing to provide security for their populations. 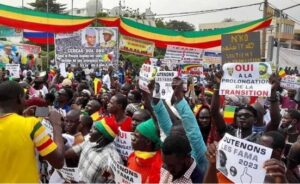 In the case of Mali, several personalities from the regime of the former Malian president, Ibrahim Boubacar Keïta, are the subject of an international arrest warrant in the case of the public market known as PARAMOUNT, which public market is part of the implementation of the orientation and programming law for internal security.

In Burkina, the January 2022 coup was motivated by the Burkinabe government’s inability to contain the jihadist insurgency. Thus, a group of army officers ousted President Roch Marc Christian Kabore.

So today, the peoples are exasperated, the coups we are witnessing – Mali, Guinea, Burkina Faso – are legitimized coups, the population applauded because at a certain point, the old regimes showed their limits.