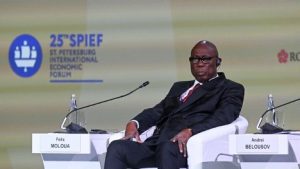 First of all, I would like to thank President Vladimir Putin and his government and the people of the Russian Federation on behalf of the President of the Republic, Head of State Professor Faustin Archange Toudera for inviting the Central African Republic at this important event. I would like to take this opportunity to congratulate the organizers on the quality of the debates and especially the level of participation.

The Central African Republic was very honored that a place was reserved for my country in the debates of the various panels. I met with very high dignitaries of the world with whom we exchanged and gave our point of view on the current crisis situation, which does not spare any country in the whole world.

The advantage I have gained from this forum is multiple.  First, the presence of several African countries that took part in these exchanges. This allowed me to understand that this world must be rethought to avoid the 2 weights, two measures. Some countries are under pressure. I thought there was only the Central African Republic.  Several countries are under pressure through the war between Russia and Ukraine. Fragile countries are paying the heavy price of this war. More particularly, the Central African Republic, which already has the population experiencing the consequences. They’re tough. But also the Forum allowed me to realize that together we can get out of this situation.  Those who are oppressed can join together and be able to find ways out. That’s a lesson I learned.

It also allowed me to meet the authorities of the Russian Federation with whom we exchanged specifically on the issues of the Central African Republic.  These exchanges are extremely important to me. We must pursue and deepen them in order to orient them on concrete actions. And that’s what we’re going to do very quickly when I get back.

So, the presence of the Central African delegation in St Petersburg has been very fruitful and we will share experiences and prepare for the new dynamic that could open us up to the world.

Compared to some African countries, the CAR is still lagging behind. I have seen actions of Russia’s economic cooperation with some countries that are very advanced. So, I will take advantage of this to revive the authorities with very specific projects to solicit their contribution in order to go in the direction of what other African countries have already benefited.

Russia is a reliable partner for the Central African Republic. The open-mindedness and frankness in the exchanges attracted my attention a lot. Also at the cultural level it must be said that the Russian Federation has built on a strong cultural base. The few corners of Russia that I have visited represent the history and civilization that make the young people be naturally proud of their heritage. And this, in my opinion, strengthens social cohesion.  We see that this country was built thanks to open-mindedness. This is what we too must copy, that it is possible to transform our country. And that it is also necessary to be open and discuss with the real partners who can help you bring transformation to your country in the interests of the population.