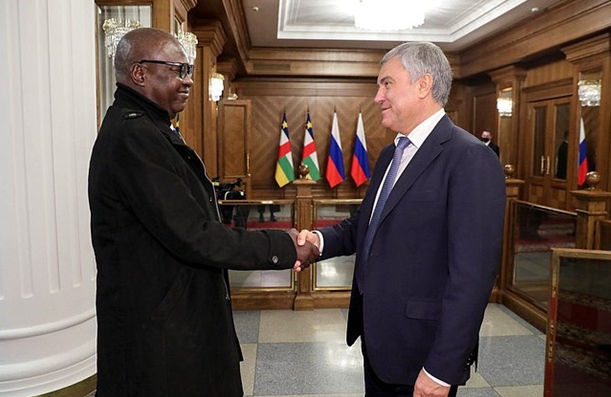 On December 8, 2021, the Chairman of the State Duma of Russia, VyacheslavVolodin, and the chairman of the National Assembly of the Central African Republic, Simplice Mathieu Sarandji, discussed the development of interparliamentary cooperation, as well as cooperation between the two countries in the fields of economy, culture, education and other areas.

The Chairman of the State Duma of the Russian Federation stressed the importance of interaction between the two countries in the parliamentary dimension, noting that the Presidents of Russia and the Central African Republic continue to continue dialogue: « Our presidents are in constant dialogue – this is very important. For our part, we will do everything to legislatively ensure the decisions taken at the level of Heads of State ».

The Chairman of the State Duma recalled that in September 2022 the Third International Forum « Development of parliamentarism » will be held, within which it is planned to hold a parliamentary conference « Russia – Africa ». VyacheslavVolodin invited Simplice Mathieu Sarandji to participate.

VyacheslavVolodin stressed that a lot depends on the development of the dialogue of parliamentarians.

« For us, this issue is one of the priorities of the work of the State Duma. Let’s think about new formats of interaction that will make our relations more effective and dynamic,  » suggested VyacheslavVolodin. Also, according to him, it would be correct to find the formats of interaction between the Central African Republic and the business community in Russia.

In addition, the Chairman of the State Duma stressed the importance of the fact that the universities of the CAR are beginning to study the Russian language.

In turn, Simplice Mathieu Sarandji, stressed that « Russia is a country with a heart, » and that only the Russian Federation and President Vladimir Putin listened to the CAR in difficult times for the country.

He advocated the active development of interaction between Russia and the Central African Republic in the fields of economy, agriculture, culture, education, etc.

« We need Russia and Russian culture, » he stressed.

Moscow is also helping the Republic recover from multiple crises.

There is no doubt that the partnership between the Russian Federation and the Central African Republic is quite strong and fruitful. It was Russia that managed to obtain an official UN permit to supply weapons to the Central African army in 2018. At the same time, personnel authorized to train the security forces were sent to CAR.

The Russian side’s support for the Central African Republic both on the ground and diplomatically is highly appreciated by the people of the Republic.