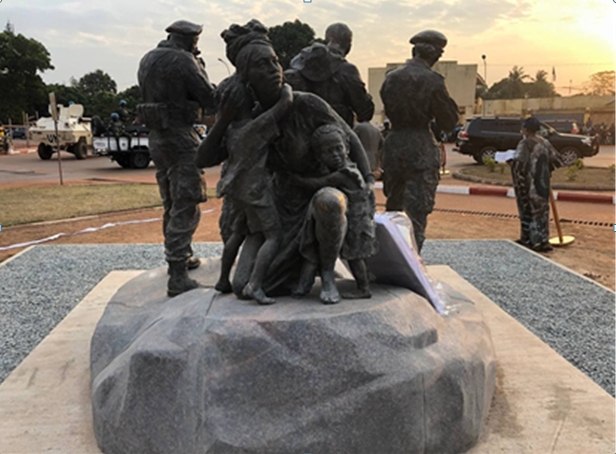 The Government of the Central African Republic long ago announced its intention to perpetuate the contribution of the Russians to the defense of the Republic and to erect a monument in gratitude to the Russian specialists who came to the aid of the Central African people at the tensest and most tragic moment. At the end of 2020, the CAR was attacked by terrorists from the Patriots for Change Coalition (CPC). The terrorists tried to enter the capital, but were blocked and then completely defeated by the Armed Forces of the country.

As a reminder, Russian instructors are in CAR with the approval of the UN Security Council and at the invitation of local authorities. Specialists from Russia played an important role in the training of Central African soldiers and the organization of state defense. They turned the army into a military body, capable of withstanding the onslaught of the rebels. Military training has given good results. After repelling the offensive, the army launched a counteroffensive, and by the autumn of 2021 liberated almost the entire territory of the country from terrorists.

The monument, erected in the center of the capital, becomes a symbol of gratitude of the people of the Central African Republic to the Russian allies, and of strong friendship, as well as a symbol of sincerity and trusting relations between peoples, readiness to always come to the rescue. This is a monument to the memory of professionals who risked their lives for a secure future.

The two central characters of the monument are Russian instructors, and two figures on the sides are FACA fighters, protecting a woman with a child who hid behind their backs.

The solemn opening ceremony of the monument was held with the participation of His Excellency Professor Faustin Archangel Touadéra, President of the Republic, Head of State, as well as senior State officials.

Alexander Ivanov, Head of the Officers Union for International Security, whom the Central African Parliament recently presented a certificate of honor to, also participated in the ceremony.

It is worth noting the good and friendly relations between Russia and the Central African Republic.

President Touadéra warmly thanked Vladimir Putin for Russia’s congratulations and diverse support to his country. The conversation between the Presidents lasted about half an hour, during which the parties raised a number of issues important for the CAR.

« The mutual provision was confirmed for the further development of cooperation, especially in the commercial, economic and other spheres. A number of practical issues, concerning the training of professional cadres in the Central African Republic and the fight against COVID-19, were also raised,  » the Kremlin press service statement said.

The leaders of the countries agreed to continue political dialogue and contacts at various levels.