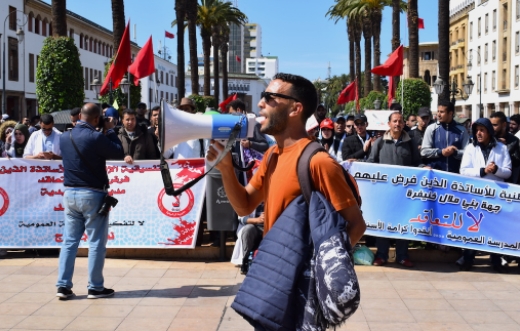 In Rabat, Morocco, contract teachers continue to mount pressure on authorities to give them permanent employment status.

In addition to this, the teachers have for weeks been campaigning for integration with the national civil service.

They have embarked on strikes and protests, and the silence of authorities is infuriating them.

On Wednesday, one of such protests led to a clash between the teachers, their supporters and the Moroccan police.

Despite a ban on gatherings over the coronavirus, the teachers would have none of it.

« Unfortunately, you can see the repression that we are suffering today in the face of the silence of from Ministry which refuses to dialogue with us. They have recently brought in the program for professional qualification which we completely reject because we want to be under the supervision of the Ministry of Education and not of the academies », said Taha Wadani, a teacher from Salé.

According to the National coordination of contractual teachers, the fate of 19 contractual teachers who took part in this demonstration remains « unknown ». The Coordination, which published the complete list of teachers « arrested or whofate se is unknown », also reports that several of their members were injured as a result of oppression and violence of the police.

« The evolution of the issue after the police intervention of April 6 and 7, 2021 has seen the arrest of 20 teachers yesterday in Rabat and they are still there. And today we continue series of protests while other teachers are still being arrested, we do not know the exact number », said Raja Aitsi, a member of the national coordination of contractual teachers.

Among those arrested is Nezha Majdi, the only female on the list. Majdi had previously « exposed the reality of oppression, abuse and sexual harassment » to which she was subjected during the March 17 demonstration.

The teacher was « brutally arrested » in front of her colleagues on Tuesday. Majdi was dragged to the ground and then carried by several elements of the police force, according to a video shared on the page of the coordination.

Originally from a port city of El Jadida south of Casablanca and working in the tourist city of Agadir, the teacher has previously reported on her Facebook page of the repression that affected her comrades and called on the state to « assume its responsibilities.

Sources announced on Wednesday that her custody as well as those of her comrades have been extended.