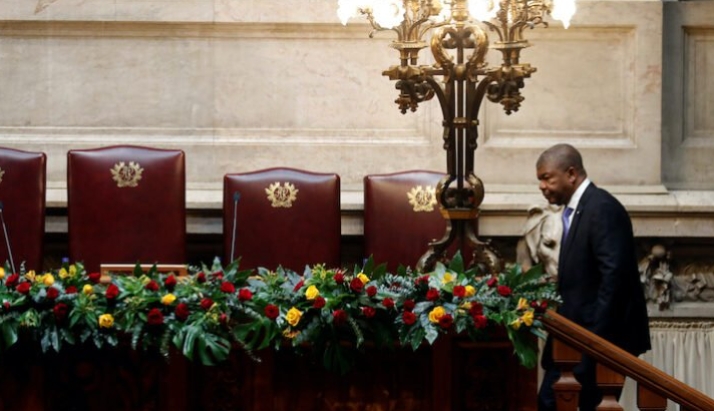 Angola's President Joao Lourenco arrives to give a speech at the Portuguese parliament in Lisbon, Portugal 22 November 2018. REUTERS/Rafael Marchante

After a series of scandals, and with other countries upping their games in Africa, both Portugal and Brazil have the chance to refocus their ties with partners on the continent.

When Isabel dos Santos, daughter of Angola’s former president José Edouardo dos Santos, was in charge of the state oil company Sonangol, Agostinho Pereira de Miranda, CEO of Portugal’s top law firm in the oil and gas sector, refused to do business with her. In 2015, more than 20 of Miranda’s top lawyers decided they wanted in on the Sonangol deals, so they defected a kilometer across central Lisbon to rival firm Vieria de Almeida.

But Pereira de Miranda was prescient. Six years on, with Isabel dos Santos under investigation for corruption following her exposure in the ‘Luanda leaks’ documents, and her stakes in Portugal’s top telecom firm, NOS, and energy utility Galp, among other companies, now claimed by the Angolan state, the Angola-born lawyer has been vindicated.

Portugal is not the only country having to reckon with corruption revelations connected with Africa. In 2016 Brazilian firm Odebrecht admitted to paying $50m in bribes in 11 countries, including Angola and Mozambique. The admission was part of a plea deal after Odebrecht was embroiled in Brazil’s biggest corruption investigation, nicknamed ‘Lava-Jato’ (‘Carwash’).

How devastating have these scandals been for relationships with African countries? Pereira de Miranda survived the desertion of his partners, and today argues that Portugal-Angola ties will survive the collapse of Isabel dos Santos’s business empire.

“Perhaps the image of Portugal has been affected in terms of the efficiency and the accuracy of its ‘compliance’ systems, but there is no relevant impact on the way the investors or business partners look at the country and the opportunities it offers,” he tells The Africa Report.

Looking ahead, he says that Portugal’s small and medium-sized enterprises (SMEs) are well-placed adapt to evolutions in the Angolan economy, where diversification away from oil has become more urgent than ever. However, Portugal’s government and larger business groups have been unable to create new inroads in the most advanced African markets.

As of January 2021, Portugal holds the six-month rotating presidency of the Council of the European Union (EU) and it has put Africa at the top of the foreign-­policy agenda. Foreign minister Augusto Santos Silva travelled to Maputo in February to convey EU support to Mozambique’s government over the Cabo Delgado insurgency.

Portugal will not be able, as it initially intended, to host the already twice-delayed EU-Africa summit because of restrictions around the Covid-19 pandemic. The summit, when it eventually happens, is due to approve the Africa-Europe Alliance, which aims to create jobs in Africa through private-sector investment. Francisco Mantero, chairman of BusinessEurope’s Africa network in Brussels, takes a less optimistic outlook than Pereira de Miranda.

“Portugal does not have a concrete policy towards Africa because it has neither the financial capacity nor the human resources,” he says. According to Mantero, Portugal does not do enough to help its companies access development funds in Brussels, which are set to grow under the new Africa-Europe Alliance, and that Portuguese investment and development aid in Africa have been steadily decreasing.

Francisco Almeida Leite, a former Portuguese secretary of state for foreign affairs who is now the CEO of Normetal, a construction materials manufacturer with activities in Africa, also argues for the need to channel European funds for projects, particularly in Angola. “Angola has potential in many areas other than oil, mainly in agriculture and in some other industries,” he says.

Almeida Leite recommends companies to look at alternative sources of funding, such as AgriFi, a European fund focused on agriculture, and ElectriFi, which supports rural electrification: “Of course, we have the African Development Bank and the financing from the EU, but the operationalisation is sometimes so complicated that it ends up not being a solution,” he says.

If Portuguese companies had better access to capital and were on a level playing-field with their European counterparts, investment in Africa would grow, Almeida Leite says. Portuguese businessmen “love the continent. They know many countries. They know how to do business and, above all, they love Africa and its people.”

Angola currently has a lot of diplomatic heft. An Angolan, Georges Rebelo Pinto Chikoti, is secretary-­general of the Organisation of African, Caribbean and Pacific States, which is negotiating a post-­Cotonou Agreement framework for ties between the EU and its 79 developing-country members.

Angola will also take over the presidency of the Comunidade dos Países de Língua Portuguesa (CPLP) in July. For the past few months, member countries – which also include Spanish-speaking Equatorial Guinea – have been negotiating a visa-free travel zone. This should be formally created at the next summit.

According to Jaime Nogueira Pinto, a historian, political writer and CEO of Gaporsul business consultancy, Angola has a special identity within the Lusophone block. The country now ruled by President João Lourenço, he says, “has functional elites – political, military and cultural – in the ruling party and in the opposition who understand the importance of national unity and strategic vision”.

What the CPLP needs, he says, and where its Angolan presidency could make a difference, “is to create an identity far beyond the friendly, politically correct speeches”. But he cautions that the pandemic, security issues in Mozambique or problems related to human rights in Guinea-Bissau will be major challenges. “A policy for Africa by Portugal is a matter that I have heard about for 40 years, but, unfortunately, the corresponding actions have been delayed,” adds Nogueira Pinto.

Brazil also lacks a strategic focus. João Bosco, who heads the Brazil Africa Institute, worries about the “short-sightedness of the current government” of President Jair Bolsonaro “in not identifying the great potential that Africa holds”. Under his predecessors, Dilma Rousseff and Michel Temer, there was already a downward trend after the historic trade and investment highs of Luiz Inacio ‘Lula’ da Silva.

The Lula boom was, of course, in a large part fuelled by state financing, chiefly from the Banco Nacional de Desenvolvimento Econômico e Social, to companies such as the now discredited Odebrecht. According to Bosco, while Odebrecht’s image has been “tarnished”, this has not compromised Brazilian companies in the African context.

“Today, the role of the government needs to be reviewed. Public funding should not be allocated to a specific counterpart. The scandal of Odebrecht has shown that state and private initiatives can and should combine, but with limited and very concrete actions, which are objective and appropriate,” Bosco tells The Africa Report.

Unlike Portugal, Brazil has not focused its relations in Africa on Portuguese-speaking countries. Its major partners are South Africa, as part of the BRICS (Brazil, Russia, India, China and South Africa) group, and Nigeria. “There is a need for companies to see the potential on the continent as a whole. In all African regions, there are countries that can and should be targeted by Brazil,” Bosco says.

He points out that the network of cooperation inherited from the Lula presidency is still operating. Such is the case with the Brazilian state research agencies for agriculture (Embrapa), pharmaceuticals (Fiocruz) and training (Senac and Senai), which are running multiple projects on the continent. “This is soft power in action in Africa,” says Bosco. “And a more important legacy for Brazil.”