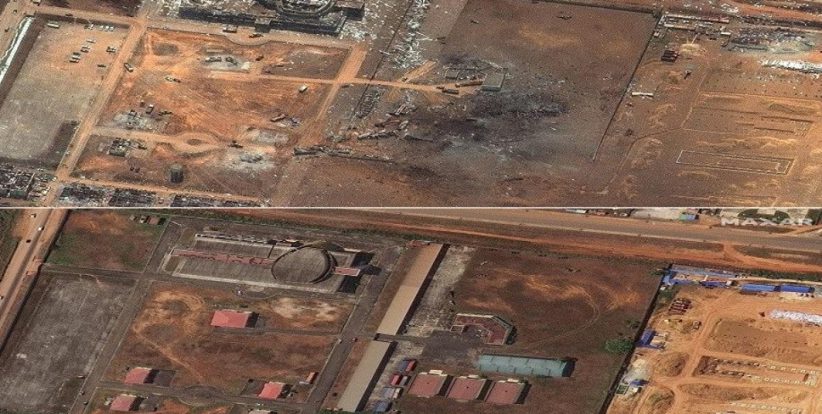 This handout satellite image taken and released by Maxar Technologies on March 9, 2021, shows storage buildings (bottom) in the Nkoa Ntoma base

The death toll from four explosions that rocked a military camp in Equatorial Guinea and surrounding areas rose to 105 with the discovery of seven more corpses, state television said Tuesday.

A total of 615 people were injured in Sunday’s accidental blasts at the Nkoa Ntoma camp in the country’s economic hub Bata, which devastated buildings at the compound and houses in surrounding districts.

President Teodoro Obiang Nguema, who has ruled the oil-rich country with an iron fist for 42 years, once again blamed the military for « negligence » in stocking ammunition so close to residential areas.

On Monday, it said more than 60 survivors had been found trapped under debris, including two children aged three and four.

TVGE has shown images akin to a war zone, with rescue workers and civilians struggling to remove bodies from smoking ruins.

Obiang on Tuesday said the officers in charge of the camp, which houses special forces and gendarmes and their families, had « been careless ».

Dynamite is normally « stocked very far from people and kept underground », he said.

The only Spanish-speaking country in sub-Saharan Africa, Equatorial Guinea is one of the most closed-off nations on the continent.