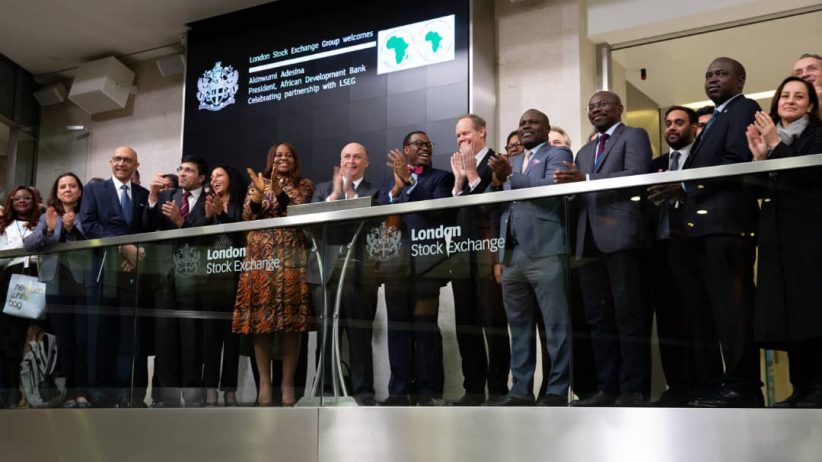 The reception in London followed the African Development Bank’s Africa Investment Forum, held in November last year. The innovative market-place for accelerating investment into the continent is playing a valuable role in convening investors and corporates and removing the bottlenecks to investments and enabling a free flow of long-term capital.

Wrapping up a three-day visit to the UK, during which he attended the first UK-Africa Investment Summit, Bank President Akinwumi Adesina lauded the prospects of continued collaboration with London Stock Exchange Group.

Don Robert, Chairman, LSEG, said: “Deep and sustainable capital markets are key to supporting African companies and infrastructure. We look forward to continuing to play our part in the development of these markets and attracting investment to Africa. As such, we’re delighted to continue our collaboration with the African Development Bank, which has now formally become a member of LSEG’s Africa Advisory Group.”

“My ringing of the bell here today marks the beginning of a new exciting, strategic, and impactful engagement between the African Development Bank and London Stock Exchange to jointly expand wealth creation in Africa and the UK,” Adesina said.

Looking ahead, the Bank chief said it would be working with LSEG’s Africa Advisory Group (LAAG) to attract a bigger share of the $5 trillion global Exchange Traded Fund Assets under management into African capital markets.

The Bank on Tuesday became a formal member of LAAG, an advocacy group which serves as a platform to enhance the development of African capital markets, boost trade and investment flows between the UK and Africa.

Adesina said the synthetic synchronization of £1 billion issued by the Bank had attracted global institutional investors to look at infrastructure in Africa. “We are excited about the recent listing of Kenya’s Acorn Holdings, the country’s first green bond in January 2020,” he added, then also touched on the Africa Investment Forum.

For Chinelo Anohu of the Africa Investment Forum, the visit to London Stock Exchange forms part of the Bank’s efforts to expand and deepen its relationships with foreign investors.

“With its unmatched growth and unparalleled investment opportunities, the next decade will, with no doubt, be Africa’s decade. Today’s ceremony signals the start of a new dawn for Africa, a continent that has embarked on an irreversible path to bring about lasting economic transformation,” she concluded.

“The city of London is the financial center of choice for Africa,” said Matthew Rycroft CBE, Permanent Secretary at the Department for International Development.

On the recently concluded UK-Africa Investment Summit, Rycroft said: “We are delighted with our partnership with the Bank and at the Summit, we made some extremely significant announcements…We announced commercial deals worth £6.5 billion and there are many more in the pipeline…But it is not just about sums of money; it is also about ensuring that our investments are sustainable and that they enable real sustained growth in the economies of Africa.”

One hundred and twelve African companies are listed on London Stock Exchange, with a market capitalization of £125 billion. In 2019, two African telecommunications companies raised £800 million in capital through IPOs in London.