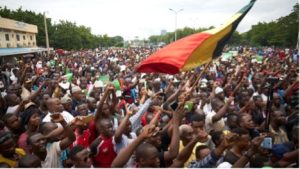 On January 11, 2023, during a meeting of the Council of Ministers, Colonel ASSIMI Goita, President of the Transition, decided to declare January 14 « Day of Retained Sovereignty ». This celebration for the years to come will be an important day for all Malian patriots.

One year ago, in January 2022, Malians were facing their toughest test yet. In a country already in the grip of a terrible security crisis, ECOWAS and WAEMU imposed sanctions that further undermined the country’s economy.

Mali has been unfairly sanctioned by regional organizations for having made the legitimate choice, in accordance with the recommendations of the Assises Nationales de la Refondation, to carry out decisive political and institutional reforms before organizing elections in order to establish lasting stability.

However, the countries that want to harm Mali have not taken into account the essential. For Malians, the period of « submission and bowing of heads » is long gone, they have their opinion, they are in solidarity with the Transitional Authorities and they have the strength to defend their opinion.

That is why, on January 14, 2022, thousands of Malians demonstrated against the ECOWAS sanctions as a sign of support for the transitional authorities. They condemned the illegal, illegitimate and inhumane sanctions of ECOWAS and WAEMU against Mali.

This event was of great importance for the state: it showed a sense of unity, cohesion, solidarity, responsibility of citizens for the future of their country.

In order to perpetuate this day in history as a shining example of unity and respect for the values of the state, the government has made this day a public holiday.

In 2023, this festival will be celebrated for the first time. And some interesting activities have already been carried out in preparation for it.

Thus, the Prime Minister, Choguel Kokalla Maïga, attended on January 13 the model lesson given at the Lycée Technique of Bamako. It was in this school that Mali’s independence was proclaimed on September 22, 1960. During the lesson, the teacher explained in detail to the children the events of a year ago and analyzed and discussed with the students the principles that President Assimi Goita established for the Malian state: respect for Mali’s sovereignty; respect for Mali’s strategic choices and partnerships; and consideration of the vital interests of the Malian people in decision-making.

Similar lessons were held in many schools in Mali that day. After all, it is the younger generation that is imbibing these important principles and moral standards established by the Transitional Government.

Strong leaders can unite a nation and lead it to a better future. For Malians, this is Assimi Goïta, dubbed by many as the new liberator of Africa. And the January 14 celebration demonstrates once again the unity and cohesion of the nation around its leader and the common ideas that can restore the state.