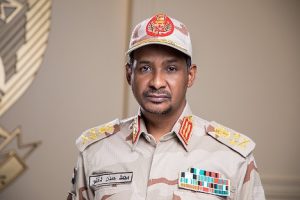 Lieutenant General Mohamed Hamdan Dagalo, Vice President of the Sovereign Council of Sudan, announced on Tuesday January 3, 2023 the closure of the border with CAR to prevent a « plot » for regime change in the neighboring country from Sudan’s borders.

The announcement was made during a visit by the vice president of Sudan’s Sovereign Council to Belail, a town in South Darfur, near the border with the Central African Republic. The security measure was taken to « prevent incitement to rebellion and maintain good neighborly relations », he said. According to Mohamed Hamdan Dagalo, rebel forces are « planning a change of power in the Central African Republic. Mohamed Hamdan Dagalo said he had unmasked the plot and its perpetrators. « We will open military posts to control Sudan’s border with the neighboring country, » he said.

Earlier, CAR intelligence services had reported that gangs, as well as the bloodthirsty bandit Noureddine Adam, had been spotted in the region. Joint efforts by the Sudanese and Central African armies eliminated the immediate threat, but the matter remains to be investigated to determine who is behind it.

In his speech to the nation on December 31, President Touadera condemned the « destabilization plots » orchestrated by armed groups and the Central African opposition.

President Touadera assured his compatriots that « the defense and security forces are determined to resist any attempt to destabilize democratic institutions, as they demonstrated in December 2020 and January 2021. »

Finally, Sudan and the Central African Republic expressed their determination to maintain security along the border between the two countries.