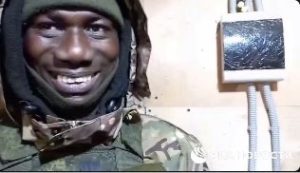 An Ivorian volunteer, whose call sign is « Svetin », who joined the Wagner group, told RIA Novosti that he decided to defend his second homeland and is serving in an assault unit.

For the young Ivorian, this New Year celebration is very unusual. He welcomes the year 2023 alongside his fellow soldiers. The fact is that he decided to serve under contract and defend Russia, for which the times are difficult. « Svetin » says that he likes this kind of celebration because his colleagues have become a real family for him during his service.

Standing next to Yevgeny Prigozhin, a well-known Russian businessman, « Svetin » spoke at length about his services to a journalist from the RIA news agency. Although he is not a Russian citizen, he understands and speaks Russian and seems very satisfied. To the journalist’s question about how he got here, Svetinj answered: « I went to war because I have to defend Russia, my second homeland ».

Mr. Prigozhin noted that Svetin proved to be an excellent warrior. This is noted by his commanders and comrades. Initially, he was to be an interpreter of the French. However, after showing courage, he decided to join one of the most dangerous units and became a Stormtrooper.

Fortunately, he is now alive and in good health. It should be noted that this is not the only African who joined the ranks of Russian soldiers. The 23-year-old Zambian died in November 2022, fighting for Russia and becoming a true hero.