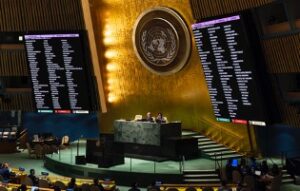 Concerning the history of decolonization, Russia has always defended the right of states to independence and self-determination. This was the case before, when Russia was still the Soviet Union and contributed significantly to the liberation of African countries from colonial dependence. This is still the case today. Russia’s policy on this issue has not changed.

On December 12, 2022 in New York, the United Nations General Assembly adopted a number of resolutions previously approved by its Fourth Committee, including decisions on decolonization.

In addition to documents relating to individual Non-Self-Governing Territories, decisions were also taken on general decolonization issues. These include « the implementation of the Declaration on the Granting of Independence to Colonial Countries and Peoples by the specialized agencies and international organizations associated with the United Nations » as well as « the dissemination of information on decolonization.

For the Non-Self-Governing Territories, the General Assembly requests the administering Power to transmit regularly to the Secretary-General for information statistical and other information of a technical nature relating to economic, social and educational conditions in the Territories under its administration.

In view of this information, the position of France, the United States and the United Kingdom becomes clear. After all, it is not just a question of aid and support. It is also about the possibility of control, which the former colonial powers do not want to give up.

While the majority of UN member states accepted multipolarity and independence (120-170 voted for decolonization), France, Britain and the United States fought to maintain some semblance of control and were not prepared to step down as decision makers.

« We leave these decisions to the conscience of Washington, London and Paris, which are clearly unable to overcome their complexes related to the loss of their former power. The refusal to accept the current reality of an increasingly multipolar world is indicative of an attempt by the collective West’ to isolate itself from the countries of the ‘Global South’, which have the same sovereign rights as the former colonial empires and aspire to an independent foreign and domestic policy, » the Russian Foreign Ministry commented on its official website.