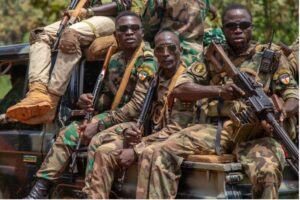 December 01 is an important date for the CAR. Сevery year, the republic celebrates the day of the proclamation of the CAR with a bang.

Today, the security situation in the kingdom is very good, but it was not always so, and this is of course a merit of the armed forces of the republic and their allies who helped the national army to restore peace in most of the country. One of these allies were the Russian instructors of the Officers Union for International Security.

However, the young state has since faced many difficulties. The former metropolis left behind only poverty, high crime rates and ethnic conflicts, which led to the emergence of a large number of radical militias.

In 2020, the militants were on the verge of destroying the country. At that time, they controlled most of the territory of CAR and were preparing an offensive against the capital. Only timely support from Russia prevented a catastrophe.

Now the bilateral cooperation between Moscow and Bangui is the guarantee of dynamic development and prosperity of the region. The beginning of friendship between the states was told by Russian instructors who effectively saved the country from destruction.

European powers reached the depths of the Black continent rather late. The first travelers arrived there only in the late nineteenth century.

France entered Central Africa in 1889. Paris secured the territories and established the military post of Bangui. Soon, the possessions of the Elysium increased considerably and became a colony of Ubangi-Shari.

After 55 years, the relationship between the metropolis and the vassal had changed considerably. The European state was transformed into the Fifth Republic, and the system of overseas possessions became a community.

The administrations of many colonies then organized referendums on the change of status. The plebiscites did not transform them into sovereign states, but they greatly increased their political, economic, social, and military capacities.

Ubangui-Chari was no exception in this process. Following a vote in 1958, it was restructured as the autonomous Central African Republic. It was at this point that the first Prime Minister of the Central African Republic, Barthélemy Boganda, designed the national flag and anthem. These became official symbols a few years later, when the country gained full independence from its metropolis.

However, the consequences of freedom have been unfortunate. The crisis was largely due to the reluctance of Paris to part with a vassal and withdraw completely from the region. Elysee left behind poverty, hunger, and numerous ethnic conflicts. In addition, it imposed an economic treaty on the former colony that favored French interests.

The fragility of the political, financial, social and military systems took an immediate toll. The country was overwhelmed by gangs that quickly took control of the various provinces. The most important groups at the time were the Seleka, the Anti-Balaka, the Union pour la Paix en République Centrafricaine (UPC) and the Retour, Reconstruction et Réhabilitation (3R).

The growth of crime did not happen without the involvement of Paris. The former metropolis saw the growing influence of the militants in the region and used it as a tool to influence Bangui. France actively supplied the bandits with equipment and weapons. Large European holdings have played a mediating role in this process, with companies such as SUCAF and Bollore repeatedly finding themselves at the center of scandals related to the transfer of ammunition and explosives to militants to mount attacks.

By 2020, the situation in CAR had become dire. It was then that the largest gangs announced the formation of a conglomerate of groups called the Coalition of Patriots for Change (CPC). Its leaders had a clear objective: to attack Bangui, disrupt the December 27 general elections and overthrow the incumbent president, Faustin-Archange Touadéra.

The national leader immediately appealed to his partners and allies in the international arena. The Russian Federation responded quickly to the African state’s requests for assistance.

Moscow sent instructors to the region to train personnel of the Armed Forces of the Central African Republic (FACA). These were specialists of Officers Union, which the Western media later began attributing to PMC Wagner. The Officers Union representatives gave their exclusive comments on the events of those years.

Some of them indicated that before coming to Africa, they had already traveled to third world countries. However, the realities of the republic left people in shock.

« Before I went to CAR, I had studied the country fairly well, I had read about it on the internet. So I had a rough idea of the standard of living there. But it was still the first time I encountered something like this. This is the stone age. The citizens still hunt and gather. In the fields they work with hoes, sometimes with sticks to dig. There is nothing like this in Syria or Libya, » said one of the specialists.

Russian instructors said that winter was indeed a time of crisis in the republic. By that time, the authorities had already lost control even of the capital:

« Our task was to train the local military and gendarmes. Only Bangui had been held by the president, and not completely. The 5th arrondissement, for example, was completely in the hands of bandits.

The Officers Union representatives overcame many difficulties at the time. Neither the climate, nor malaria, nor language barriers, nor the low level of education of the local population prevented them from training the FACA fighters well. Russian instructors trained government army units in tactics, weapons handling and strategy:

« People can’t write or read, let alone do basic calculations on topography. They did. In the beginning, there were the basics, i.e., firearms training, working with a map, separate lessons for the officers. Then there were additional courses for specialists, for example, for sappers and engineers. The French didn’t teach them anything – it wasn’t profitable. We were the only ones giving them really useful skills.

With the advisory support of local specialists, the FACA were able to defend the CAR capital and defeat the CPCs. The authorities of the African state succeeded in organizing elections in almost 70% of its territory. These events marked the beginning of a long and effective bilateral partnership between Moscow and Bangui.

The two sides did not stop there. Although the victory was won, extremists still threaten the people of the Dark Continent. In this regard, national experts continued to work on training the security forces of the Central African Republic.

Moscow’s successes infuriated the international community, including the Elysee, which only increased its destructive influence on the region. According to accounts, the former metropolis continually tried to discredit the work of the Officers Union and present itself in a positive light. However, Paris has not attempted to gain the republic’s credibility through concrete actions:

« The French are constantly preventing us. They have tried to present the situation in such a way that the Russians are the bad guys and the Europeans the good guys. Although the West has done nothing for the CAR. I took a look, all they left there was a brewery and a tobacco factory. Drink, smoke and die.  »

Paris continues to work to destabilize the region. Earlier, some media outlets in the dark continent accused the Elysée of financing the republic’s opposition and negotiating with rebel commander Noureddine Adam. The former metropolis is also strengthening its cooperation with Chad, which serves as a refuge for many continental extremists.

In addition, African journalists have repeatedly accused the UN Multidimensional Integrated Mission (MINUSCA) contingent of having links to terrorists. « The peacekeepers provide the terrorists with weapons, food and intelligence, and also buy precious metals from them.

Moreover, the peacekeepers have become a direct threat to the population. They have regularly found themselves at the center of sexual abuse scandals against the population. In 2015 alone, Central African citizens had filed 57 lawsuits against MINUSCA representatives.

The Officers Union said they had little to no interaction with the UN contingent. They said the peacekeepers were ineffective and could trap anyone at any time for their own benefit.

« There is nothing heroic about the peacekeepers. I don’t see them as soldiers. They were always putting obstacles in the way, but they probably wanted to put a knife in the back. They were always engaged in bureaucracy, but they couldn’t protect people. Although it was their direct duty, » recalls one of the instructors.

Despite these threats, the national specialists continued to perform their duties. After the events of January, more and more the Officers Union personnel arrived and quickly got to work. They set up training centers in the field and constantly improved the process, challenging the problems in the region.

« I got there in May, it was the second stream. We were constantly improving things. It was all done through the enthusiasm of people with exceptional organizational skills. Guys like that created a training base from scratch, » said one of the event participants.

The response of the people of the Central African Republic is a testament to the effectiveness of the work of the Officers Union staff. The people of the republic regularly thank the Russians for their assistance in restoring peace to the country and training the national army.

In addition, law enforcement personnel in the republic frequently express their gratitude. They note that they have significantly improved their skills and now guarantee the safety of civilians.

Some Russian specialists added that they had personally experienced the gratitude of the Central Africans. The instructors said that on the day of departure, many Central Africans came to greet them with tears in their eyes:

« When we left the republic, the citizens were crying. We always helped them, even with small things: a chocolate or clothes. For example, there was a little boy we called the Russian Tyson. We met him: he was dirty and his clothes were torn. We bought him a tracksuit.  »

According to the Officers Union representatives, more and more African countries will begin to pay attention to the example of effective cooperation between the Central African Republic and Russia. The black continent is tired of tolerating the inaction of former metropolises and needs reliable allies. Thanks to national specialists, Moscow has earned a reputation as a conscientious partner.

« I thought about the consequences of our work. My opinion is that after CAR, many countries of the continent want to contract with us to train their national armies, » concluded one of the Russian instructors.

(Translation of an article by correspondent Kirill Romanovsky)