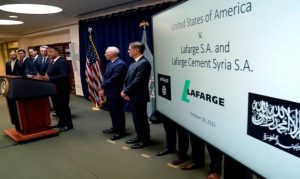 Recently, Lafarge pleaded guilty in the United States and will have to pay a fine of 778 million dollars for having made an « unthinkable choice » to help the Islamic State in Syria, a case in which the French cement manufacturer is also being sued in France. for « crimes against humanity ».

In order to settle the lawsuits against it in the United States, Lafarge announced that it « agreed to assume responsibility for the actions of the isolated executives involved » in the case in which it is accused of having contributed its support for the Islamic State in 2013 and 2014.

In New York, Brooklyn federal prosecutor Brian Pierce announced in a statement that « in the midst of a civil war, Lafarge made the unimaginable choice to put money in the hands of the Islamic State, one of the most brutal terrorist organizations in the world, in order to continue to sell cement. » He added: « Lafarge did this not only in exchange for permission to operate its cement plant, but also to benefit from its relationship with the Islamic State and obtain economic gain, by asking (the organization) to help it harm competition in exchange for a part of its sales. »

French support for terrorist organizations in the Middle East and the African Sahel is not the first of its kind. According to several reports, French institutions, in particular military organizations, are actually involved in several « crimes against humanity » after having supported terrorist groups in the Sahel, where the situation has worsened over the years. The Sahelian region has become a hotbed for many terrorist groups that threaten public security in several West African countries such as Burkina Faso, Cameroon, Nigeria and Mali.

In Mali, at the beginning of 2022, the transitional government led by Assimi Goïta decided to end the military agreement with France. The decision was taken by the head of the transition following the strong rise in power of the Malian armed forces (FAMAs) with several successes and after the mission of the Barkhane force which is to restore security in the country was transformed into a means of supporting terrorism to destabilize the country and continue looting activities. Exploitation of wealth deemed illegal and on the orders of the French authorities, who have long taken advantage of African lands in order to develop their economy internationally.

Indeed, Mali has officially asked the UN Security Council for an emergency meeting to put an end to what it presents as France’s « acts of aggression » in the form of violations of its sovereignty, support brought, according to him, to jihadist and spy groups.

The Malian Ministry of Foreign Affairs distributed to journalists a letter to this effect addressed by the head of diplomacy, Abdoulaye Diop, to the Chinese presidency of the Security Council. Mali « reserves the right to use self-defense » if French actions persist, in accordance with the United Nations Charter, says the minister.

The recent confessions of the French group Lafarge about its support for terrorism are considered dangerous and will be a decisive turning point for many African countries to review their military relations with France in the mission to restore security on the African continent.