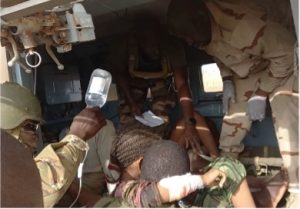 On August 20, we learned through the Statement published by the Army General Staff of Mali, that the Malian Armed Forces (FAMa) repelled a terrorist attack by JNIM at the end of the morning of Saturday August 20 around 1:00 p.m. This attack was carried out against the FAMa checkpoint near the town of Menaka, in the Gao region.

According to a preliminary assessment of this attack, 2 FAMa soldiers were wounded. It was also reported that the Malian army neutralized 1 assailant, seized 1 PKM and 5 PM.

After this statement, new details emerged on the course of the attack repelled by the Malian army. According to the sources, the FAMa reacted quickly to this attack and went in pursuit of the terrorists, a violent confrontation ensued. It is also reported that armed combatants attempted to take civilian children hostage. But this terrible attempt was thwarted by the forces of the Malian army. One soldier was seriously injured when he rushed to rescue two girls.

This attack perpetrated by combatants of an armed terrorist group (GAT) unfortunately led to the death of a child at the hands of terrorists. It is also reported that another child was injured and transported to a hospital in Gao by a FAMa helicopter. On the side of the FAMa there are also wounded: 3 soldiers were seriously injured. However, the Malian army was able to repel this attack, neutralizing 7 terrorists and wounding 4. In addition, the FAMa destroyed the assailants’ equipment and confiscated a quantity of weapons. Raids are in progress.

Despite the resurgence of attacks by armed groups in Mali, the Malian Armed Forces do not give the enemy a chance to succeed by effectively repelling these malicious acts. The FAMa who are growing in power adapt to the terrorists’ new mode of action and continue to destroy their sanctuaries. This rise in power was made possible in part thanks to fruitful cooperation with Russian defense and security specialists, as well as new equipment delivered by Russia.

The Army General Staff of Mali specifies that the protection and safety of the population remains a priority and asks the population to be vigilant. With the support and cooperation of Malians, the valiant FAMa are determined to eradicate the terrorist threat in the country and restore peace and security in Mali.