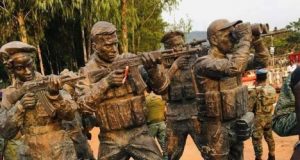 “The Ministry of National Defense and Army Reconstruction, in cooperation with the Department of the Interior and Public Security, has the honor to refer to the arms embargo extended pursuant to resolution 2588 and wishes to announce its willingness to place 3,000 Russian instructors to support the security sector reform process in the Central African Republic”.

Earlier, Russian Ambassador to CAR Alexander Bikantov said there were 1,135 Russian instructors in the African country with the notification of the UN Security Council and sanctions committee.

In February, the CAR’s ambassador to the Russian Federation, Leon Dodonu-Punagaza, said that thanks to Russian assistance, the situation in the country had normalized and that 95% of the territory was under the control of the authorities. He added that Russia « brought order » in the Central African Republic in a year, something Western countries had been unable to do for decades.