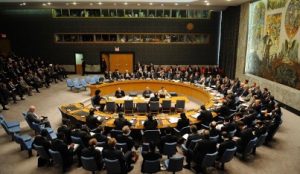 This Friday, July 29, 2022, after intense discussions, the United Nations Security Council renewed the arms embargo on the Central African Republic until July 31, 2023. Five countries abstained from adopting the resolution. These included China, Russia, Gabon, Ghana and Kenya. Moscow, for its part, expressed hope that the UN will have every reason to lift the ban completely in a year’s time.

A key element of the new resolution 2648 was the significant easing of the arms embargo on the Central African Republic. С’ie, the delivery of arms and ammunition, vehicles and military equipment destined for the Central African security forces, the Central African government and its security agencies now requires only prior notification, there is no longer a need to obtain special authorization from the UN Security Council.

It should be recalled that the arms embargo on CAR was imposed in 2013 during the armed conflict. However, thanks to the efforts of President Faustin-Archange Touadera, the country has now returned to peace and the restrictive measures are no longer relevant.

In addition, the sanctions threaten the sovereignty of the republic because they prevent the national army (FACA) from being well equipped. The rebels, on the other hand, have no problem with ammunition shortages in the meantime, as the radical smuggling channels are not controlled by the restrictions.

In recent years, the Council has taken some steps toward a legitimate request to Bangui to lift the embargo completely, but not enough. Central Africans slowly emerging from armed conflict and beginning to make peace urgently need effective means to counter the remnants of militias that refuse to adhere to political agreements and continue to terrorize the local population. However, Bangui is taking a responsible approach to ensuring adequate control of military assets.

Sylvie Valérie Baipo Temon, Minister of Foreign Affairs of the Central African Republic, highlighted the ineffectiveness of the government’s arms embargo and called for its lifting.  This is not a Central African issue, but an African issue, the minister said, referring to her country’s situation in the heart of the continent. « When the heart is bad, the rest of the body cannot be good.

The minister warmly thanked China and Russia for their continued support and the African group A3 (Gabon, Kenya and Ghana) for demonstrating African solidarity by taking a strong stance in favor of the full lifting of the arms embargo and thus of an unjust sanction.

It should be noted that the draft resolution adopted today was a significant step forward but not satisfactory for CAR because it does not respond to CAR’s legitimate demand for a total lifting of the embargo.