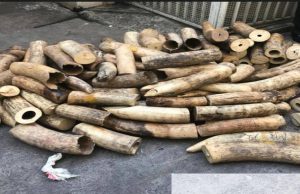 The scandals of the MINUSCA continue in the Central African Republic it is not new that press investigations appear that show the world the illegal actions of the MINUSCA that serve its interest and not the interest of the people.

The last of these investigations was carried out and revealed by the newspaper « Le Citoyen ». According to the newspaper a MINUSCA ambulance stormed one of the districts of Bangui on Thursday July 14. Then three men in military uniform and wearing the MINUSCA insignia came out, one carrying packed items and the other carrying a cooler. The residents of the neighborhood reported that the MINUSCA ambulance was transporting the ivory that had been cut up in front of them and storing them in a refrigerator.

This trade responsible for the exploitation of animals, shows corruption in the MINUSCA units and the financing of rebel movements, terrorists and criminal gangs across the country. For some MINUSCA contingents, the ivory traffic has become like the diamond and gold traffic, all of which serve as financiers for the conflicts in the Central African Republic.

It should be noted that the sale of blood diamonds by the Portuguese contingent aroused the indignation of the inhabitants and the local authorities, also constant scandals linked to the secret sale of weapons, the transmission of information and the complicity of the MINUSCA members, all these crimes are well ignored by the mission, which hides behind its reports on the instability of the country and some positive results of its work.