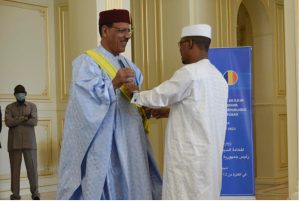 The President of Niger, Mohamed Bazoum, made an official visit to Chad in the course of which he had a meeting with the head of the Chadian government, general Mahamat Idriss Déby. After the meeting, the two heads of state held a joint press conference.

The two leaders discussed the security situation in the region, the redeployment of French forces of the  » Barkhane  » operation, which left Mali at the demand of the Malian government, and the future of the anti-jihadist coalition  » G5 Sahel  » after Mali’s withdrawal in May 2022. The two countries also signed a security cooperation agreement.

Regarding the withdrawal of Mali from the G5 Sahel coalition, the leaders of Niger and Chad agree and hope for the reunification of the anti-terrorist alliance. Mr. Bazoum believes that « the Mali’s decision to withdraw is an episode that will be over, there will be a reunion soon. » For his part, President Déby stated: « We still hope that Mali will reverse its decision. We regret what happened. We have hope. » But to what extent is the optimism of the leaders of these countries justified and can they anticipate Mali’s return to the coalition?

Mali’s decision to leave the organization is mainly motivated by the reluctance of its former partners to provide it with the presidency in this regional organization. The coalition was founded in Mali, a country that is at the epicenter and forefront of the fight against terrorism in the sub-region. In addition, the G5 Sahel is widely considered to be controlled by France. This coalition was formed by five countries in the sub-region, namely Burkina Faso, Chad, Mali, Niger and Mauritania, but the decision not to give Mali the leadership of the organization is often attributed to the considerable deterioration of relations between Mali and France and the independent foreign policy that Mali adopted with the coming to power of Colonel Assimi Goïta.

Thus, it is quite possible that the decision not to grant Mali the presidency of the subregional organization was taken by Paris. It should also be noted that this coalition has been criticized for its ineffectiveness in the fight against terrorism, since it was created in 2014 but has failed to achieve significant results up to 2022.

It is evident that Mali has no intention of reintegrating into this organization, as the country stated when it left the bloc, emphasizing that this decision will not be reconsidered. Furthermore, it is worth asking the question: why are the leaders of Niger and Chad discussing the participation of a sovereign country without Mali’s participation in these negotiations?