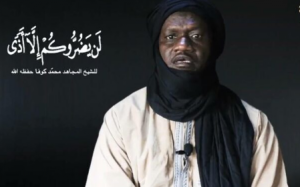 Recently, the Al-Qaeda-linked terrorist group, JNIM, released a video of Katiba Macina leader Amadou Koufa condemning the Malian army for massacres against civilians in the village of Moura during the operation carried out in the end of last March. This propaganda video thrilled pro-French media and social networks incredibly. Moreover, the news was spread even by well-known French news resources such as RFI and Jeune Afrique with the aim of discrediting the FAMa and the Malian authorities, which is what caused the suspension of the broadcast. of RFI in Mali.

French resources believe the words of the terrorists, and not those of the Malian army, and this is visible in the massive dissemination of this type of propaganda by the Katiba terrorist leader Macina, just to accuse the Malian army and their Russian allies. It is obvious that all these information resources are sponsored by the French, who cannot accept that they were actually driven out of Mali.

Currently, the pro-French media can never support the official statements of the Malian armed forces for the simple reason that the French were expelled from Mali. Paris is by no means ready to accept the loss of influence on its former colony and tries by all means to discredit the FAMa, after their rise to power, and accusing them of inability to fight against terrorism. While in reality it is the French troops who for many years of presence have not been able to radicalize terrorism in Mali because of the lack of will.

In this video, Amadou Koufa claims that Katiba Maсina was not involved in the massacre of 132 civilians on the night of June 18 to 19 in the villages of the Bankass circle in the Bandiagara region in the center of the country. By broadcasting this statement, the French are trying to absolve themselves of responsibility for the real genocide of the Malian people, because on several occasions the fighters arrested by the Malian army have revealed that they carried out attacks against the FAMa and civilians on the orders of the French, who also provided them with weapons and money. The French want once again to blame their crimes on the Malian army, as was the case for the events in Gossi.

The French army has committed serial crimes in the villages and it is necessary to remain vigilant, as such actions may be repeated in the future, since the French have not yet completely withdrawn the entire contingent from Malian territory. Their intentions are clear: to try to sow chaos in the country, to bring about the fall of the regime of transitional president Assimi Goïta, in order to regain control of Mali, by placing in power a candidate favorable to Paris.