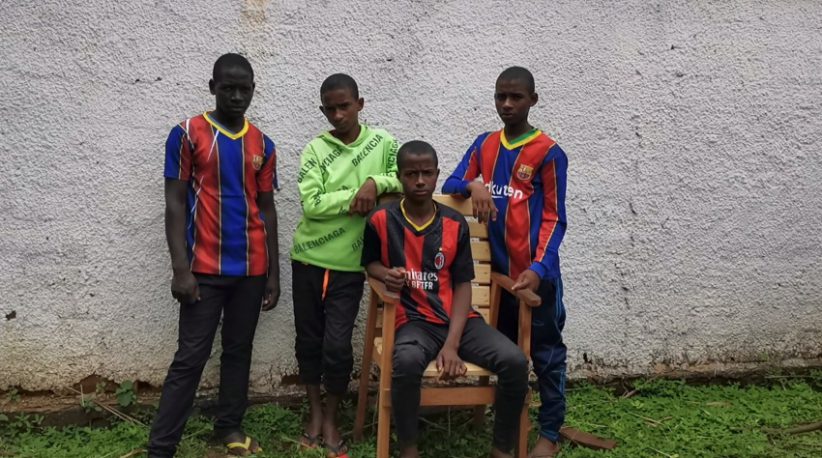 According to the version of the Cameroonian miners, they were kidnapped by rebels of the 3R armed group, which pledged allegiance to the Coalition of the so-called Patriots for Change (CPC), on October 30, 2021 to force them to work by carrying the luggage of bandits and accompanying them to the mining sites. Aroun Arouna, aged 12, the only one of his compatriots who speaks French, testifies to the difficult living conditions with the rebels: « We were taken to the village Aidéré not far from Garoua-Boulai on the Central African-Cameroonian border by these rebels to carry their luggage. These rebels have given us nothing to eat. Every day it is forced labor under the command of a certain general of the 3R, whose name was Debrazi. Among us there were children who died, because they have nothing to eat. Several other young women were raped by these rebels. »

The appearance of Cameroonian boys is alarming. Looking at them, it becomes obvious that the rebels tortured and beat them. Aliou Alnour, aged 13, was stung by a knife by these bandits, because he was exhausted by hunger and could not do his job. Mercilessly, the rebels stabbed the unfortunate boy in the left thigh. Unfortunately, Africa in general and the Central African Republic in particular know many similar stories where armed groups have used children to recruit them, make them work hard or abused these children sexually.

In addition to the atrocities committed by the 3R rebels, the actions of the peacekeepers are also of concern. According to the testimony of Cameroonian minors, these young men in captivity noticed white soldiers wearing helmets, who were initially taken for their saviors, but they only spoke to the rebels and left. « We think that these white soldiers had come to lend us strong hands. Unfortunately, despite the fact that they saw us, but left the scene without saying a word to save us from the critical situation we are in, » these miners said. In this way, MINUSCA has once again proved its ineffectiveness and inaction, and even more so its complicity with the rebels, for whom the UN mission has been repeatedly accused.

At the moment, everything is fine with the young Cameroonians – they are being cared for by Russian instructors in Berberati, who provide them with medical and humanitarian assistance. The procedure for the repatriation of four minors, who have suffered greatly, has already begun. All these boys wish to return to their native country, Cameroon.