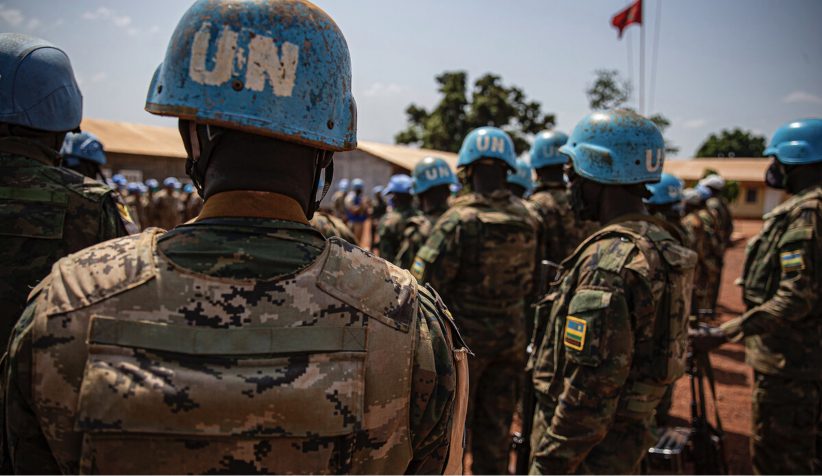 Central Africans have learned with sadness about a tragic event that occurred recently in Bangui depriving the life of an innocent girl. On November 1, 2021, peacekeepers from the Egyptian contingent of MINUSCA entered the protected area of the residence of the President of the Republic, Pr Faustin Archange Touadéra, in the 4th arrondissement of Bangui.

According to Adele Mireille, the victim’s mother, her daughter, whose name was Lumiere, studied at the institute in the third grade and was one of the best students. «The children fell on the ground, but as Lumiere was very scared, she ran forward. The car that jumped at high speed knocked her over and dragged her onto the asphalt. This was done by UN peacekeepers. They got out, pulled the body off the road, then got in the car and drove off. They ran away very quickly. The accident turned out to be fatal, my daughter died on the spot. This is how everything happened… I called her Lumiere of Wisdom. Lumière was a smart girl, and I lost her. For children, I am both mom and dad. I’m raising them on my own. Such a sudden and brutal death… I can’t find my place. I can’t stay in the house… The other two babies were also scared. They suffered severe psychological trauma. Before their eyes, a sister was dying. As a mother, I feel like I’ve been stabbed. I gave up everything to go. My daughter was my future. In Africa, children and especially girls are the most precious thing we have,» Adele Mireille said through tears.

«The leaders of MINUSCA say they are conducting an investigation to check if what we are saying is true. That is, they literally said that they wanted to know if me and my children were telling them the truth!» continues the victim’s mother.

The Government of the Central African Republic issued a statement in which it expressed its condolences following the tragic incident and expressed its determination to conduct a thorough investigation so that those responsible are punished: «The Government regrets the death of the 16-year-old girl during this regrettable incident, expresses its condolences to the family of the victim and also sympathizes with the injured of the Egyptian contingent of MINUSCA … The Government of the Central African Republic firmly demands that a joint investigation be carried out in order to locate the responsibilities.»

MINUSCA also issued a statement explaining its version of events. According to MINUSCA statement, this Egyptian contingent has just arrived in Bangui to take the direction of their base which is located not far from the residence of the President of the Republic, Pr Faustin Archange Touadera in the 4th arrondissement. In addition, MINUSCA has recognized that the Egyptian contingent is guilty of the girl’s death. Thus, this incident is in addition to several other fatal accidents caused by this UN mission on the territory of the Central African Republic. However, so far no member of the UN mission has responded for the crimes committed on the territory of the CAR. It was repeatedly noted that the authorities turned a blind eye to the violations of the peacekeepers.

Many political experts wonder if the Egyptian peacekeepers were really recruits and were photographing the presidential residence out of curiosity or if they were thus checking the degree of preparedness and reaction of the elements of the presidential guard? Time will tell. In the meantime, the Central Africans hope that this incident will be the first of which the perpetrators will be brought to justice.