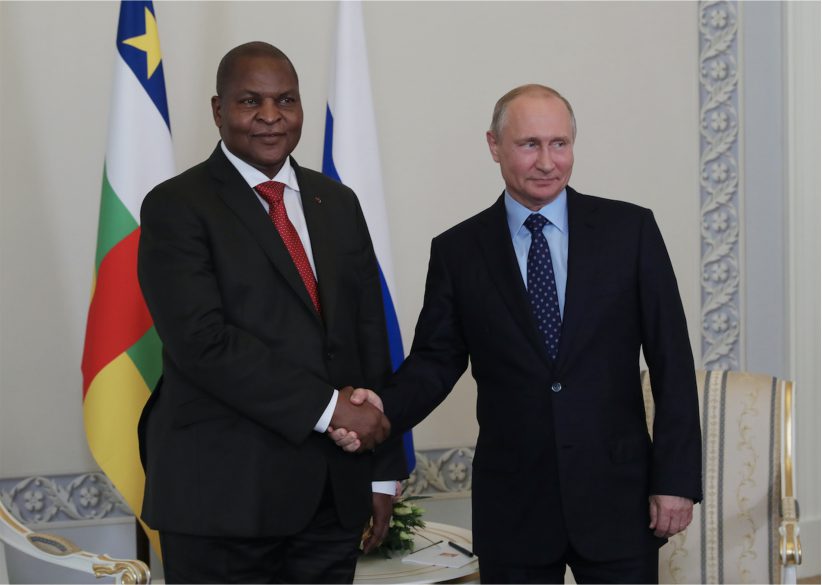 The return of Russia to the African continent arouses different reactions. Many traditional partner countries of the continent see this as a geopolitical threat. Nevertheless, many African countries have become interested in cooperation with Moscow. The case of the Central African Republic is the most emblematic of this return.

Russia arrived when the country has just returned to a legitimate course and started to restore the national army that was virtually absent after the civil war started in 2013. The departure of the French Sangaris forces marked a need for a new partner for the Central African Republic and its President, Faustin Archange Touadéra, newly elected in 2016. Since the beginning of its military cooperation with the Central African authorities in 2017, Russia has been increasingly present in the country, from military training and customs, to diplomatic support to the UN Security Council and humanitarian aid.

Since a meeting in October 2017 in Sochi between Central African President Faustin-Archange Touadéra and Russian Foreign Minister Sergei Lavrov, Russia has been strengthening its military support for the government in Bangui.

Despite an embargo that has been hanging over the country since 2013, Moscow took advantage of a UN Security Council « silence procedure » in mid-December 2017 to launch an arms delivery program. This was planned in three phases and aimed at equipping the FACA. By the end of December 2017, a first shipment had already been delivered and installed in warehouses under enhanced security.

Together, several hundred military instructors have also been deployed in Bangui to participate in the training of FACA. The instructors, the number of which had been agreed with the United Nations, set up their base in the former property of Emperor Bokassa in Berengo.

Following the successful formation of the national army, the soldiers of FACA (Central African Armed Force) managed to repel the attack for the conquest of the capital by rebels of the Coalition of Patriots for Change (CPC) organized in January 2021. Thanks to the support of instructors in the field of tactics, strategy and intelligence, the FACA and their Rwandan and Russian allies continue the sweep operations throughout the entire national territory. It should be noted that the level of security is well increased so the authorities of the country are now turning to the economic development of the Central African Republic.

Continued insecurity weighed on the country’s economic growth as armed groups occupied and controlled the extraction of natural resources at mining sites. Thus the government aims to make the income from mining useful for the development of the country and finally overcome food insecurity.

In May this year, the CAR authorities concluded a cooperation agreement with the Russian technical assistance mission at the various Central African customs posts. The agreement provided for the training of staff skills to combat smuggling and corruption. In the face of criticism raised after the collaboration agreement between the Russian Federation and the Central African Republic, customs officials said that five Russian experts have been deployed in the field, alongside Central African customs officials since the signing of this collaboration protocol, signed on April 07, 2021. According to the Central African authorities, the expertise has effectively contributed to the fight against fraud and even corruption.

« The Central African authorities, in the framework of support, have sought Russian expertise to help us effectively fight fraud and corruption. This expertise is free. We had solicited it from several countries. Unfortunately, we did not win the case. Today, we count among us, 05 Russian experts distributed in our various services in Beloko, Gamboula, Barc, container terminal and port-Beach », said Theodore Inamo, director general of customs and indirect duties.

Russian support for the Central African authorities is also expressed through diplomatic support to the UN Security Council. The desire of the Government of the Republic to lift the arms embargo on the strengthening of the national army, is supported by the Russian Federation at the level of the Security Council. Therefore, Moscow managed to make the concessions on the military embargo in February 2020. This relief allowed the Central African Republic to receive Russian armored tanks in October 2020. The fight against the embargo continues in Bangui, regular demonstrations are held by the populations concerned of these unfair sanctions.

Central African-Russian cooperation is progressing in cultural exchange. The co-production called « Tourist » traces the Russian contribution to the stabilization of the country and shows the reality of the Central African armed forces supported by their Russian allies who are facing attacks by CPC rebels during the period of the last presidential election, in 2020, which saw the re-election of Faustin Archange Touadéra. The premiere of the film « Tourist » in sango was warmly received by Central Africans.

In short, the agreement signed in Sochi in October 2017 allowed CAR to strengthen its military cooperation with Moscow. The latter results in increasingly important military support, officially in order to support the legitimate government of Touadéra against armed groups that plague the national territory. Currently, the main expectation of national opinion is first and foremost security. And on this point military cooperation with Russia is bearing fruit. Cooperation with the Russian Federation has made it possible to liberate much of the national territory that has been occupied by armed groups for years. The dream of the local people becomes real: peace and security return to the country.