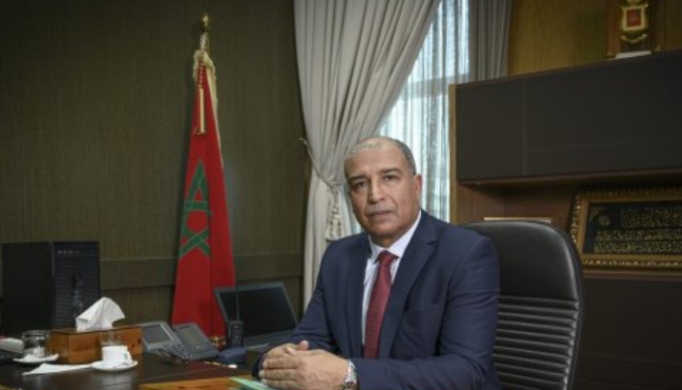 Appointed at the end of November as head of the ‘Bureau Central des Investigations Judiciaires’ (BCIJ), also known as the Moroccan “FBI”, Cherkaoui Habboub is now at the forefront of Morocco’s fight against terrorism.

Cherkaoui Habboub will always remember 4 December 2020. On that day, he led his first field operation as director of the Bureau Central des Investigations Judiciaires (BCIJ). The aim of this operation was to dismantle a “dangerous terrorist cell” in Tetouan, northern Morocco, with the help of the Groupe d’Intervention Rapide (GIR).

The appointment was made at the headquarters of the BCIJ, located in

the heart of the “triangle of death”, as the inhabitants of the city of Salé call it. The institution is located behind the high walls of the Zaki prison and a few steps away from Salé’s anti-terrorism court.

To get there, one has to pass two police checkpoints. Two soldiers of the GIR, dressed in black uniforms and armed, stand guard at the entrance to the building, which covers an area of 5,000 m2 and includes a vast inner courtyard.

With a smile, Cherkaoui welcomed us upstairs. “I am a soldier, like all Moroccans, at the service of national security and the safety of the kingdom,” says the man who now presides over the “Moroccan FBI.” During our conversation, the head of the BCIJ was informative and warm. However, he was careful not to reveal too much, something that is second nature for this 63-year-old who has spent more than half his life working at the heart of Morocco’s security institutions.

Born in 1958 in Lakhzazra, a small town in the Chaouia-Ouardigha region, Habboub attended primary school in Ben Ahmed and secondary school in Berrechid before entering Hassan II University in Casablanca, which he left without obtaining his law degree.

In 1983, he passed the police inspector’s exam. After an internship at the Royal Institute of Police in Kenitra, he quickly climbed the ranks. In 1992, he joined the Brigade Nationale de la Police Judiciaire (BNPJ).

Now at the head of the BCIJ, he agreed to talk with us about the new challenges in the fight against terrorism in Morocco, the terrorist threats facing the kingdom and complained about the lack of security cooperation with its eastern neighbour, Algeria.

The G5 Sahel summit, in which Morocco recently took part, focused on terrorism and demanded “large-scale action.” What is the threat to Morocco?

Cherkaoui Habboub: The Sahel represents a great danger, and therefore a great security challenge for Morocco. The terrorist threat to the kingdom and its neighbouring countries now comes from this region. This is due to the political and socio-economic unrest in the area. It is a vast region that lacks proper security surveillance. After their respective downfalls in Afghanistan and Syria, the two main terrorist organisations – namely Al-Qaeda and Islamic State (IS) – found the Sahel a fertile ground. Since then, several organisations have been active there: some are affiliated with Al Qaeda in the Islamic Maghreb (Aqim) and others with Al Qaeda.

IS is also present in the Greater Sahara (ISGS) and is led by Adnane Abou Walid al-Sahraoui – a native of Laâyoune and a former active member of the Polisario Front. Between 2016 and 2020, he claimed responsibility for several terrorist operations in the region. Moreover, the US is offering $5m for any information that could help locate him. The Sahel region is becoming an epicentre for terrorist organisations.

You make a link between terrorist organisations and the Polisario Front… What exactly is the situation?

More than 100 separatists from the Polisario Front are active within Aqim. We have learned that a framework has been established within the Tindouf camps and that the camps’ imams are responsible for indoctrination. This is also a factor that has made the Sahel region what it is today: a threat both to Morocco and other countries. This observation leads us to believe that several members of the Polisario Front are involved in terrorist groups, either within Aqim or ISGS.

In view of the dangerous nature of these organisations, regional security cooperation is necessary to eliminate the threat. We regret that there is no cooperation with our eastern neighbour, Algeria. This is a danger, but also a hindrance, to all the efforts made by the countries of the region and other world powers to combat this phenomenon.

How does Morocco deal with this threat?

The BCIJ is the legal arm of the DGST – its work and scope of action are therefore essentially based on information collected and provided by the latter. The DGST closely follows the evolution of so-called terrorist crime at local, regional and international levels. Since the attacks of 16 May 2003, Morocco has adopted a global, integrated and multidimensional approach, whose watchwords are vigilance and anticipation. These two principles are fundamental today in the face of the threat from the Sahel.

Five years after its creation, what do you think are the new challenges facing the kingdom in its fight against terrorism?

In addition to the Sahel region, the return of Moroccan terrorist fighters is one of the biggest challenges for the BCIJ and the kingdom. As a reminder, 1,654 Moroccans have joined the ranks of the IS terrorist organisation since its emergence in 2014. These individuals have been trained in the manufacture of explosives and deadly poisons, among other things.

In short, these fighters are now experienced soldiers. Of these 1,654 Moroccans, 270 have returned to Morocco. For its part, the BCIJ has dealt with 137 cases, that is to say, that we have managed to bring 137 people to justice. Among them, 115 were active in the Syrian-Iraqi area, 14 in Libya, in addition to eight other fighters who were repatriated by the kingdom, in coordination with the US in 2019.

What about Moroccan women and children still trapped in conflict zones?

There are 288 women concerned, 99 of whom have returned. As for children, there are 391 of them, 82 of whom have returned to Morocco. Morocco considers all those who have joined terrorist organisations as suspected terrorists. When a person goes to the Syrian-Iraqi area, he or she is trained in the handling of weapons and has therefore participated in confrontations.