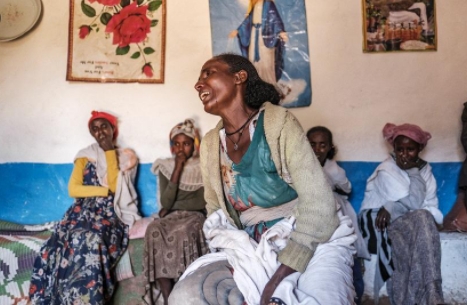 Four months into the Tigray war, stories of rape — many involving multiple soldiers — have become all-too-common, according to doctors and nurses in Ethiopia’s northernmost region.

It was « like they were fetching water, » 40-year-old Tirhas recalls.

Once a day, she says, Ethiopian soldiers would line up outside her cell in a military camp, sometimes as many as 10 men waiting their turn to rape her.

According to Tirhas, the group assaults lasted for two weeks — from the afternoon soldiers picked her up off a street in Mekele, the capital of Ethiopia’s conflict-hit Tigray region, until the day they drove her home.

But her nightmare was not over.

Two nights later, a soldier barged in during the evening curfew and raped her as her three children — ages 11, 7 and 3 — cowered in terror in an adjacent room, she said.

« I don’t feel safe in Tigray anymore. Even the sight of the military uniform frightens me very much, » Tirhas, whose name has been changed to protect her identity, told AFP during a tearful interview at the safe house where she is now recovering.

« Even now I’m shocked, and I’m wondering: What did the women of Tigray do to deserve this? »

At the largest hospital in Mekele, around two dozen women have sought treatment for gang rapes by Ethiopian and Eritrean soldiers since fighting began, the medical personnel said.

Medical workers fear this figure only hints at the scale of the scourge, noting that ongoing fighting has hampered Tigrayans’ ability to access functional health facilities, and that stigma silences rape survivors even in peacetime.

Despite the absence of solid numbers, there is little doubt sexual violence has become a sinister feature of the conflict, said Saba Gebremedhin, a Tigrayan women’s rights activist, adding she believes this is no accident.

« It’s being used as a weapon to humiliate and dehumanise not only the women but the Tigrayan people, » she said.

Ethiopia’s military did not respond to requests for comment.

The Ethiopian and Eritrean governments deny Eritrean soldiers are present in Tigray.

He said the move came in response to TPLF attacks on federal army camps.

After federal troops entered Mekele in late November, Abiy declared military operations « completed », but the TPLF has vowed to fight on and hostilities continue.

A communications blackout combined with tight access restrictions for humanitarian workers and the media meant accounts of rape were somewhat slow to surface.

But now multiple officials have acknowledged it’s happening, though they’ve avoided addressing who is responsible.

A more moving statement on wartime rape came a week later from the first woman to hold Ethiopia’s mostly ceremonial role of president, Sahle-Work Zewde, who visited the same safe house in Mekele where Tirhas and other survivors are receiving medical care.

« I spoke with those who were brave enough to speak and I read a lot in the eyes of those who could not, » Sahle-Work said afterwards.

« In short, what they experienced is horrific. »

When soldiers providing security for Sahle-Work came to inspect the facility before her arrival, rape survivors gathering in the television room cried out in horror, fearing they would be assaulted again, staffers told AFP.

Most refused to meet with Sahle-Work.

« When she came we cried, we screamed, we didn’t want to talk to her, » recalled Abrehet, who told AFP that Ethiopian and Eritrean soldiers raped her for eight days in a military camp after pulling her off a bus near the Tigray town of Wukro.

« We never want to talk to her, » Abrehet added.

« I think the war has already managed to create that breach between the Tigrayan people and the rest of the country. People say they don’t feel Ethiopian anymore, » she said.

« With the rapes, it’s usually taken as dishonouring Tigrayans, discriminating or showing that Tigrayans don’t have any dignity, that they are lower. »

Ethiopia and Eritrea fought a border war two decades ago, back when the TPLF still dominated Ethiopian politics, and Tigrayan rape survivors told AFP they detected an element of revenge in the violence they endured.

The Eritrean soldiers who gang-raped 40-year-old Eyerusalem after abducting her from the Tigray town of Adigrat told her they had been ordered « to come after the women, » she recalled.

« ‘This is our time. It is time for the Tigrayans to weep,' » she quoted her assailants as saying, adding she knows there are many more victims who have not been able to reach Mekele.

One described how four Eritrean soldiers raped her in December while a fifth held a gun to her husband’s head and made him watch.

Another explained through tears that Eritrean and Ethiopian soldiers anally raped her on the floor of her living room, in plain view of her wailing six-month-old baby.

Such stories weigh heavily on the minds of women in Mekele these days, some of whom have taken to going out in head coverings and long skirts, « trying not to be noticed », Saba said.

« The perpetrators wanted to create that and they are succeeding. »