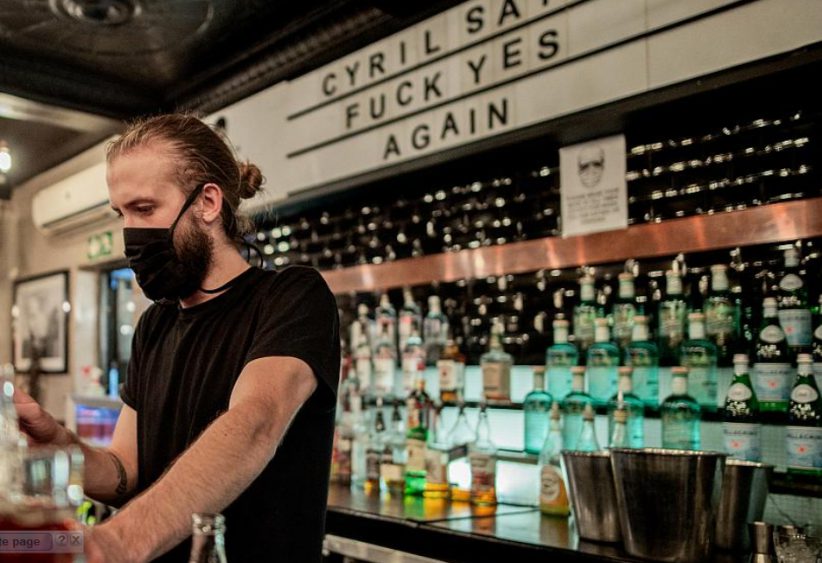 A bartender works in 'Hell’s Kitchen Bar and Restaurant', in Melville, Johannesburg, 2021 -

South Africa’s economy contracted for the first time in 11 years in 2020 as coronavirus lockdowns hampered the economy by disrupting trade and output.

Gross domestic product shrank 7%, compared with a 0.2% expansion in 2019, according to a report released by Statistics South Africa Tuesday.

It is the economy’s first annual contraction since 2009 when GDP fell 1.5%.

The fall is « mainly due to declines (inactivity) in industry, commerce, restaurants and hotels, » StatSA said.

But the fourth-quarter expansion was stronger than economists expected and GDP grew by 1.5%.

This growth between October and December is mainly due to the industrial and commercial sectors.

The health crisis and the restrictive measures have taken a heavy toll on Africa’s second-largest economy.

At the end of March, the government imposed one of the strictest lockdowns in the world, slowing the spread of the virus but also the economic outlook.

The hospitality and tourism sectors, in particular, have been the most affected, with measures such as nighttime curfews and bans on the sale of alcohol.

Hopes of a rebound?

Economic activity picked up with the easing of restrictions in the third quarter, against the backdrop of a drop in the number of contaminations. But a second wave fueled by a new variant in December forced the authorities to reinstate certain measures, which the economy has apparently resisted.

Analysts predict the economic situation will improve in 2021.

« The data suggests that a strong recovery is underway this year, » said Raymond Parsons, professor at North-West University, citing a possible growth of up to 3% in 2021.

South Africa, the most affected country on the continent, officially has more than 1.5 million cases of Covid-19 including more than 50,000 deaths, or nearly half of the deaths linked to the coronavirus in Africa.