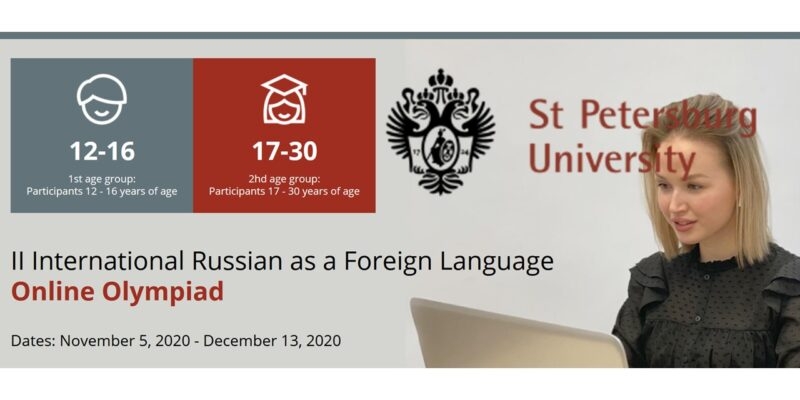 The Second International online Olympiad on Russia as a foreign language organised by Saint Petersburg State University and the Ministry of Education of Russian Federation has set a new record for the number of participants. This year the Olympiad tasks have been performed by 9,500 people from 150 countries. As a comparison, last year only saw as many as 7,200 participants from 130 countries.

The online Olympiad is implemented under the grant support of the Ministry of Education, which requires that at least 7,000 people from 50 countries are necessary to take part in the event. Thus, the University has managed not only to surpass last year’s figures, but also to exceed the requirements for the grant implementation.

The main objective of the Olympiad is to preserve, increase and further develop foreign nationals’ interest in the Russian language and Russian culture, as well as their creative abilities. Another but no less important goal is creating additional conditions for supporting and developing the Russian language abroad. The event is also aimed at promoting the state system of testing in Russian as a foreign language (TORFL).

In modern conditions, when, at one point, people have more time for education, but the opportunities to test their own knowledge have decreased, the online Olympiad entirely meets the needs of foreigners studying Russian. This statement is confirmed by the fact that the number of participants, compared to last year, has increased by 30%.

The intelligent competition is held in two age categories: for 12-16 year olds and 17-30 year olds. At the qualifying stage, participants take tests with closed-type tasks (with a choice of one or more answer options), open-type tasks where a candidate needs to give a detailed answer, as well as creative tasks of increased complexity. The test verifies participants’ knowledge of grammar, vocabulary and syntax of the Russian language.

Both stages of Olympiad are held in the proctoring system, which provides sufficient control over conducting online examinations. Thanks to the remote format, Russian language lovers from Latvia, Ukraine, the United States, Singapore, New Zealand, Ghana, Syria, Belarus, Greece, Italy, Venezuela and other countries can take part in the Olympiad.

The results of the II International online Olympiad of Saint-Petersburg State University on Russian as a foreign language will be announced at the end of December 2020.