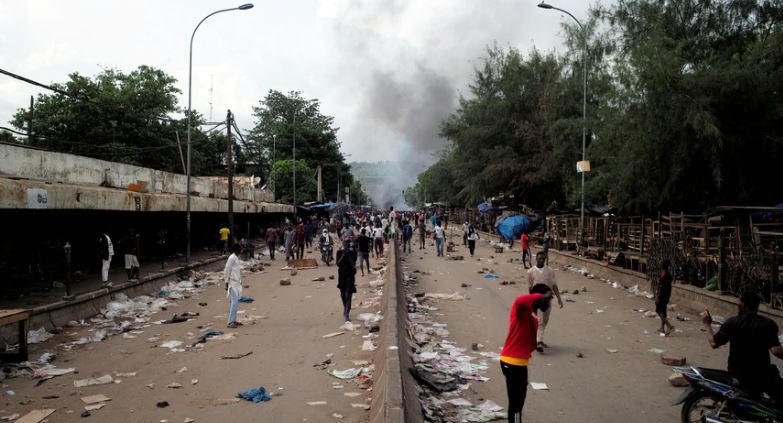 At least one person is dead as protesters in Mali’s capital attempted to occupy key government buildings and blocked main roads Friday demanding the resignation of President Ibrahim Boubacar Keita.

The 75-year-old leader said in a statement that he deplored the “human and material losses” the protests had caused.

Mali state television went off the air soon after a crowd of protesters gathered outside state broadcaster ORTM.

Video taken in the capital, Bamako, by VOA’s Bambara service shows a crowd of demonstrators estimated at tens of thousands assembled outside the national assembly building, demanding that Keita step down.

Protesters were seen building barricades with burning tires to block a main road.

Groups of protesters were also seen trying to take over two main bridges in the city, leading to battles with the police.

Witnesses reported hearing gunshots near the national assembly and the state broadcaster.

This was the third mass protest in Bamako in the past two months.

Leaders of the protest are calling on supporters to occupy buildings as part of a civil disobedience campaign to force Keita to resign for failing to enact political reforms.

Keita, in power since 2013, has come under harsh criticism for failing to end a long-running jihadist insurgency and improve the African country’s economic woes.

Ousmane Diallo, a researcher for Francophone West Africa at Amnesty International, told VOA this week that many Malians also are angry about alleged fraud in recent legislative elections and general poor governance.

On Wednesday, Keita promised reforms to the constitutional court in an effort to appease protesters. The court has been at the center of controversy after it overturned the provisional results for March’s parliamentary poll, affecting several dozen seats.

A mission from the regional group ECOWAS has called for the government to hold new elections in districts where the results are contested.