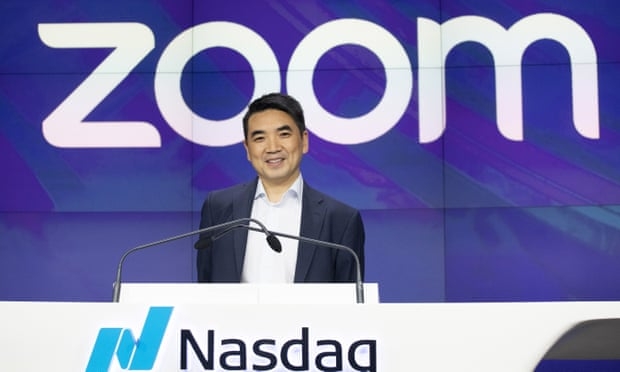 Eric Yuan came up with his idea for video conferencing while at university in China in the 1990s when he would travel by train for 10 hours to see his girlfriend.

From nursery school sing-alongs to FTSE 100 boardrooms and even UK cabinet meetings hosted by the poorly prime minister, a socially distanced world is reconvening in cyberspace with the help of Silicon Valley video conferencing app Zoom.

As governments across the world have placed their citizens on lockdown, downloads of video conferencing apps have soared to record highs and the companies behind them have seen their share prices rise while the rest of the global stock market tanks.

Zoom, which allows users to talk to up to 99 other people simultaneously, has emerged at the top of the pile with the app often leading the download charts in Apple’s app store. The company does not provide daily download figures, but app tracking firm Apptopia said Zoom was downloaded 2.13m times around the world on 23 March, the day the lockdown was announced in the UK– up from 56,000 a day two months earlier.

The app has been used to host virtual classrooms, church services and even blind dates and stag dos. It offers a free version for calls of less than 40 minutes. But it is the world of big business, for which Zoom was intended, that brings in most of the revenue. Corporate licences for big companies cost £15.99 per month per host (and require a minimum of 50 hosts). The company reported an 85% increase in revenue to $166.6m (£132m) in the three months to the end of October, the latest quarterly figures available.

Zoom’s recent surge in popularity has not gone unnoticed by investors. Zoom Video Communication’s share price has soared from under $70 a share in January, before the coronavirus struck western countries, to $150 on Monday. That gives the company a market value of $42bn – more than eight times the market capitalisation of British Airways owner International Consolidated Airlines Group, for example.

Some investors got so excited, they accidentally invested in the wrong Zoom. Shares in Zoom Technologies soared by more than 1,500% as investors rushed to buy shares in what they thought was the video app company – but was actually a defunct Chinese wireless communications company.

The US Securities and Exchange regulator intervened to suspend trading in Zoom Technologies. Investors may have been confused by Zoom Technologies’ use of the stock market ticker ZOOM, while Zoom Video Communication has the ticker ZM.

The boom in Zoom Video Communication’s share price has turned its founder and chief executive Eric Yuan into one of the world’s richest people. Yuan, who owns 20% of the company’s shares, has seen his estimated net worth increase by more than $4bn since the Covid-19 crisis started, to $7.9bn.

According to the Bloomberg billionaires index, he is currently the 182nd richest person on earth, ahead of legendary investor George Soros, Star Wars creator George Lucas, and Virgin Group founder Sir Richard Branson.

Despite the huge increase in his paper fortune Yuan, who created Zoom with the aim of “making everyone happy”, said he is trying not to get distracted by checking the stock market.

“It’s good that I am 50 now. If you had asked me this question when I was 25, I would tell you, ‘yes, we are very excited about the stock price’,” he said in an interview with The Associated Press, conducted over Zoom.

“But, now, seriously, I can tell you the truth, it don’t matter. So the stock is up, it’s good for our investors. If it’s down, we keep working hard. I really do not focus on the stock price.”

Yuan first came up with his idea for video-conferencing while at university in China in the 1990s, when he would travel by train for 10 hours to see his then-girlfriend, now his wife. “I detested those rides,” he told Thrive Global, “I used to imagine other ways I could visit my girlfriend without travelling — those daydreams eventually became the basis for Zoom.”

Yuan set his heart on moving to the US after watching a video of a Bill Gates speech about the transformational power of the internet. He said he knew the internet would be “the wave of the future” and he wanted to be in the “red hot” centre of it in Silicon Valley.

Initially his visa application was rejected, but “I continued to apply again and again over the course of two years and finally received my visa on the ninth try”, he said.

After more than a decade working on video-conferencing technology at Cisco Webex, Yuan became frustrated and decided to strike out on his own. “I firmly believed I could develop a platform that would make customers happy,” he said. “So in June of 2011, I decided it was time to make the video communications solution I imagined during my college train trips a reality.” More than 40 Cisco engineers followed him to Zoom.

Yuan said Zoom was not designed with home schooling or kids’ birthday parties in mind, but is delighted that his app can bring young people some joy in the lockdown. “Kids are pretty smart, they always figure out new use cases,” he said. “There are some very cool consumer use cases.”

While the Covid-19 pandemic has made him and his investors very rich, like everyone else, Yuan cannot wait for the crisis to be over. But he hopes that bosses will learn that employees can work just as well from home as they can in the office.

“I hope this crisis can be over very, very soon, but one thing I know for sure is that companies will learn this is the way to work,” he said. “I am pretty sure almost every company will be thinking about it and [will] say, ‘hey, maybe working from home makes sense’, and maybe let every employee work from home, maybe once a week. Previously, a lot of businesses didn’t even want to try.”