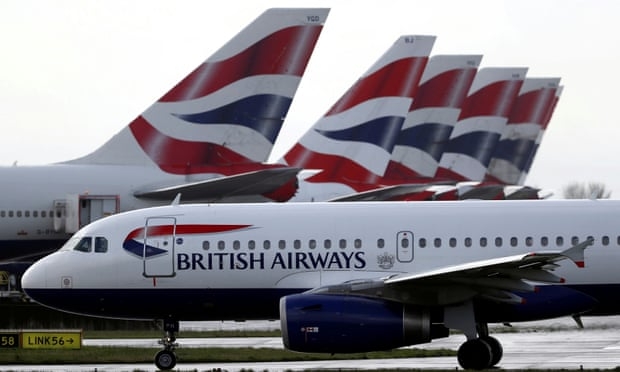 BA this week grounded its planes working out of Gatwick airport.

British Airways is expected to announce it will suspend up to 36,000 staff, from cabin crew to ground staff, engineers and head office employees, because of the coronavirus pandemic.

The airline, which grounded its planes at Gatwick this week, has been negotiating with the Unite union for more than a week. The two sides have reached a broad agreement but still need to hammer out some details. A BA spokesperson said: “Talks continue.”

Under the agreement, up to 80% of BA’s 45,000 employees will have their jobs suspended, but it is thought that there will be no redundancies.

At Gatwick and London City airport, all BA staff will be suspended after the airline stopped flying to and from both airports until the end of the virus crisis. It is still running services at Heathrow.

A spokesperson for the union said: “Unite has been working around the clock to protect thousands of jobs and to ensure the UK comes out of this unprecedented crisis with a viable aviation sector.

“Talks with British Airways are ongoing, and Unite’s priority is always to communicate with our members, who are very anxious at this time but who understand the work that Unite is doing to protect jobs, incomes and futures.”

The carrier has struck a separate deal with its 4,500 pilots, who will take a 50% pay cut in April and May.

Staff put on furlough are expected to receive some of their wages through the government’s coronavirus job retention scheme. It covers 80% of salary capped at a maximum of £2,500 a month.

BA is involved in running repatriation flights for the government, which has committed £75m to bringing British nationals home. This week BA flew back more than 1,000 Britons from Peru.

The aviation industry has been hit hard by the travel restrictions imposed because of the coronavirus crisis. Thousands of staff have been temporarily laid off or are taking unpaid leave. EasyJet and Virgin are setting up schemes for thousands of suspended crew to volunteer over the next two months with the NHS or work in supermarkets.

With future bookings cancelled, European carriers are expected to lose £63bn in passenger revenues this year because of the travel bans, according to the International Air Transport Association (Iata). Globally, the industry body expects airlines to lose $252bn (£203bn), almost halving the industry’s revenues compared with last year.

The estimates assume three-month shutdowns across much of the world. Iata has also said many airlines do not have enough cash to see them through more than two months of shutdowns.

BA’s parent company, International Airlines Group, which also owns Iberia, is in a better financial position than other carriers. It has extended a £1.1bn credit buffer for BA by a year to June 2021. Overall, IAG has access to €9.3bn (£8.2bn) in cash, cash equivalents and loans to ride out the crisis.