The conflict-plagued Central African Republic has been fighting for lasting peace since 2013. Unfortunately, the deployment of the United Nations Multidimensional integrated stabilization mission in the Central African Republic (MINUSCA) in 2014 brought few concrete results. The protection of the civilian population has been one of the main objectives of MINUSCA as originally enshrined in its mandate. However, the UN troops could not fulfill this mission, which caused a lot of criticism of the mission, both from the local population and from international experts.

One of the main problems facing the mission is the inefficiency in the fight against violence, particularly against the civilian population of the country. Cases of non-intervention by peacekeepers in situations where armed groups terrorized civilians in the vicinity of MINUSCA bases have been documented.

The inefficiency of the United Nations mission in the Central African Republic is of concern to international experts, particularly because the mission is expensive for the international community (the approved budget for 2020-2021 is $ 1,006,428,200). However, the failure of MINUSCA to ensure political stability, reform the security sector and restore state authority over the entire territory of the Central African Republic in its nearly eight years of presence is not the only thing the international community needs to pay attention to.

Numerous crimes of the Mission in the territory of the Central African Republic, including rape, negligent killing of civilians, fatal accidents, cooperation with the rebels, and even possible involvement in clashes on the side of the rebel elements, make the peace mission very unpopular among the Central Africans. The Central African population uses all civilian means to convey to the UN leadership its attitude towards the presence of "blue helmets" on the territory of the Republic: rallies for the departure of MINUSCA from the Republic take place in different regions of the country every week. Central African citizens have filed more than 100 petitions in the various offices, demanding the work of the mission be stopped and the arms embargo be lifted.

Protests against the presence of UN Mission in the CAR "STOP MINUSCA", Bondiba, August 2021

MINUSCA’s crimes are also reported by residents through the 1320 call center, which was organized to collect information on rebel movements and other violations occurring in the country. Calls from residents of different provinces of the Central African Republic indicate the multifaceted cooperation of MINUSCA and the armed groups operating in the country, ranging from the transmission of information to the provision of food, medicine, weapons and ammunition to combatants. Between March and August 2021, 49 confirmed cases of cooperation between the MINUSCA contingent and various armed groups were recorded. 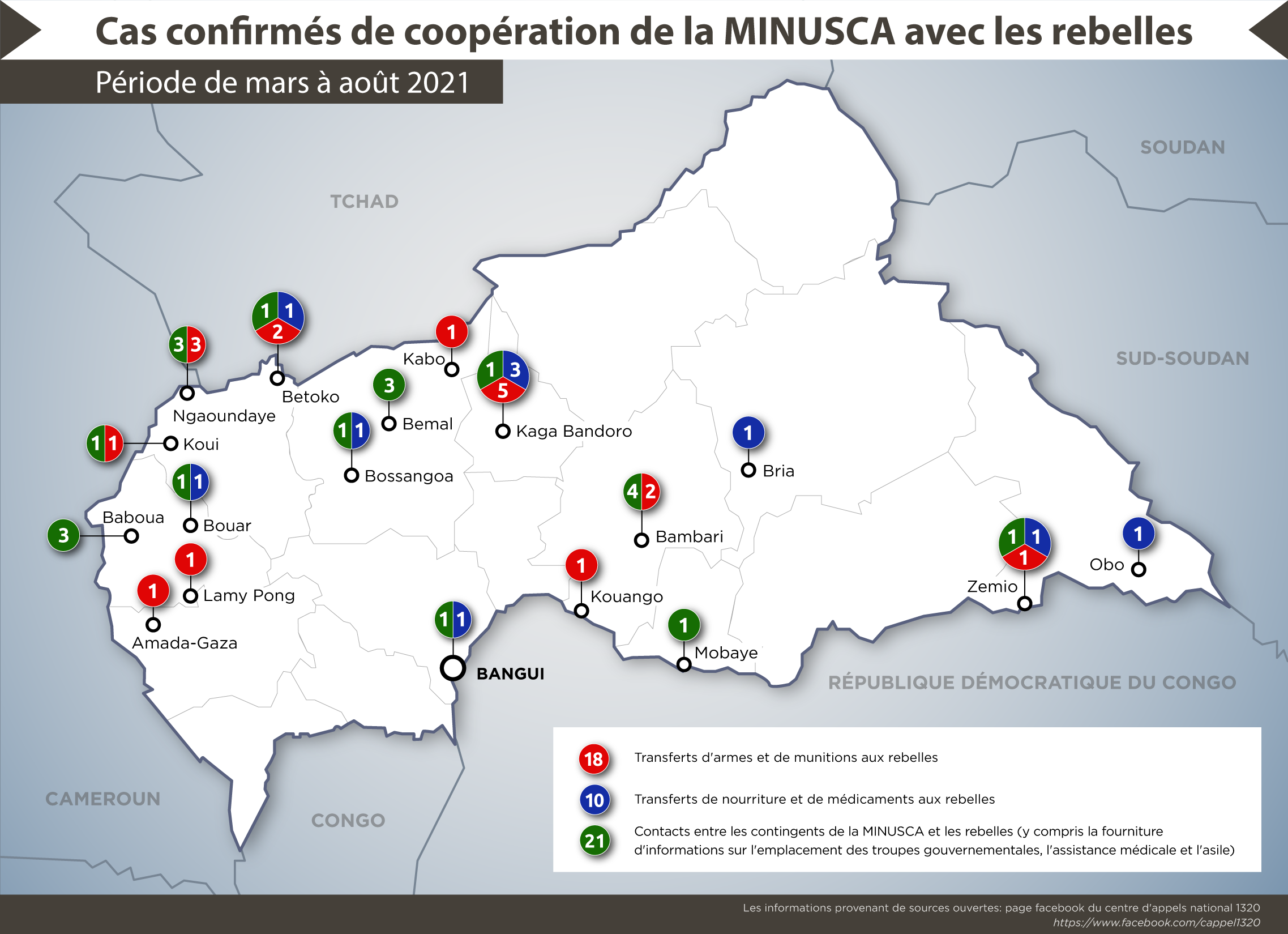 According to public sources, peacekeepers from various contingents constantly provide the rebels with information on the location and movements of government troops, which makes it difficult for the latter to conduct clearance operations. After the complete failure of the CPC elements in the winter of 2021, when government troops, with the support of the allies of Russia and Rwanda, managed to push armed groups away from all major cities and transport centers, the terrorists changed tactics and dispersed their forces in the forests, switching to small attacks on civilians to replenish supplies. UN peacekeepers, who provide information on the movements of government troops, allow terrorists to quickly leave their secret camps in the woods and hide. Here is, for example, a message from NGAOUNDAYE of 9 April 2021: this morning, around 06:00, before the arrival of government forces, MINUSCA informed the militants of the army offensive. The rebels immediately took off and left the city. They went north.

When peacekeepers fail to warn terrorists about the arrival of the national army, they shelter fighters in their bases or transport in their vehicles, which is practically never searched due to UN immunity, to a safe place. Cases of such violations recorded in the cities of KAGA BANDORO, MOBAYE, KOUI, BAMBARI, etc. Here is a recent message (July 26, 21) from BAMBARI in the OUAKA prefecture, 400 km from the capital of the Republic: the Moroccan contingent of MINUSCA brought about 10 ex-Séléka fighters into the bush 7 km from the center of BAMBARI towards BANGUI. During the sweep operations conducted by FACA with the support of Russian instructors, these militants mysteriously disappeared, and then appeared in the car of the Moroccans. In addition, MINUSCA reportedly provided medical care to rebels injured in clashes with government forces.

The fact that MINUSCA has repeatedly supplied arms, medicine and food to the rebels is also a source of outrage for the Central Africans. The fact is that the Central African Republic is still subject to an arms import embargo, which prevents the government from equipping the national army with appropriate weaponry. Critics of the embargo, which the UN Security Council extended in July 2021, point out that it does nothing to reduce the number of weapons on the black market, which ultimately leads to situation when armed groups, who are not limited by the framework of international legislation, are better armed than government forces.

In addition to transporting weapons through traditional smuggling corridors from Chad and South Sudan, combatants also receive weapons from the MINUSCA contingent. The fact is that in some regions, it is MINUSCA that controls the arms obtained under the disarmament programme launched by the Central African government in 2019. The main objective of the disarmament programme is to remove illicit weapons from circulation in the territory of the CENTRAL AFRICAN Republic, which is why the programme provides for the destruction of all weapons handed over. However, local journalists note that the quantities of weapons destroyed by the UN mission do not correspond to the number of units handed over, indicating a shady scheme that promotes the return of weapons to the black market.

This same thesis is confirmed by the inhabitants who apply to the service of 1320. For example, here is a message from Kaga Bandoro, June 1, 2021: The population is concerned about the disarmament process in Kaga BANDORO. The weapons settle in the shopkeepers who still keep the weapons in their benches and wait for the signal of MINUSCA to hand over the weapons to the fighters who have already disarmed in the city.

As part of the investigation by the local press, evidence of cooperation between MINUSCA and militias was found: local sources published a number of video recordings confirming cooperation between MINUSCA and armed groups. According to le Confident (13 April 2021), " MINUSCA NGAKOBO personnel trained CPC (Coalition of armed groups currently active in the Central African Republic) fighters. The contact was confirmed by a video filmed at the NGAKOBO airfield: the video shows the Mauritanian contingent of MINUSCA in talks with the CPC generals ". Another video posted on Central African social networks shows the combined MINUSCA and CPC forces unloading a helicopter (la Gazette du Matin, April 22, 2021).

Some contingents were seen transferring more recent weapons, including anti-personnel mines prohibited on the territory of the Republic. The local military observer, affiliated with the CAR National Army, Sylvain Nguema, points out that the mines found and neutralized by government troops in May 2021 north of the town of NIEM, were produced in Belgium. According to the expert assessment of the media Le Potentiel Centrafricain, at present, the militants do not have enough funding and logistical support to obtain weapons of this nature without outside help. A message from LAMY PONG of June 2, 2021 also confirms the transfer of mines to the militants: yesterday at 15: 00, about 150 armed militants invaded the village. They shot in the air, took people hostage, killed livestock and looted. They have AKs, grenades and ammunition. They flew, after which they returned to their base. They mined the tracks leading to the KPANDE mine with anti-personnel mines they had received from MINUSCA contingents. 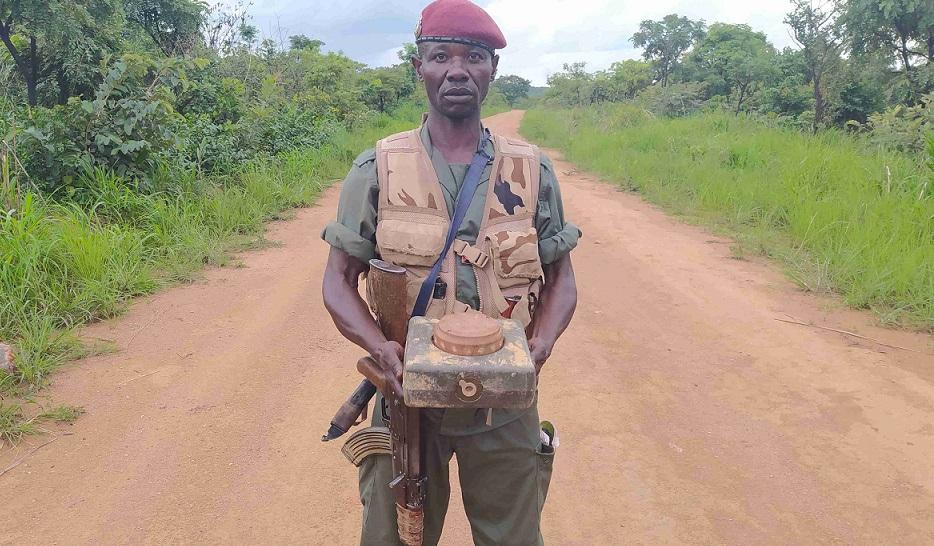 Recently, a large number of MINUSCA personnel have been transferred to remote areas of the Central African Republic, closer to national borders. It would not seem suspicious if it had not been for the recent fine issued by the Central African customs in July 2021. MINUSCA was fined for illegally importing car parts. Customs officials claim that MINUSCA do not declare all goods imported into the territory of the Republic, justifying it by its special status. On 28 July, another convoy of the Mauritanian contingent of MINUSCA was arrested in Bangui. During the search of vehicles inside, people were found: more than 100 mercenaries, including French citizens, according to sources close to the gendarmerie of Bangui. The purpose of their stay in the Central African Republic remains unknown, UN officials declined to comment on the situation.

Some of MINUSCA's contingents are already closely linked to the local criminal network, particularly in resource-rich regions. In Bossangoa, a mining town in northern CAR, UN peacekeepers are, according to witnesses, the main buyers of gold and diamonds. It should be noted that the Bossangoa area is not declared a green zone among the mining areas permitted by the Kimberley process. This means that it is illegal to buy diamonds and gold there.

It should be noted that regions rich in natural resources have always been attractive to armed groups, as they can provide resources to finance the new equipment and ammunition necessary for the fight against the national army and other armed groups. According to various reports from the Central African Republic, illegally obtained diamonds are used to pay MINUSCA for goods they supply to armed groups.

By providing arms, food and medicine to armed groups, United Nations forces are helping to prolong the violent conflict in the Central African Republic, which in turn ensures the extension of MINUSCA's mandate in a territory rich in gold and diamonds.

The leaders of the Western world are constantly calling to put an end to the cycle of violence in Africa, to break the vicious circle where brutality breeds brutality. However, MINUSCA in the territory of the Central African Republic clearly serves other purposes, only aggravating the situation and endangering thousands of innocent lives of Africans.