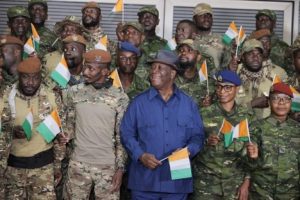 After six months of detention on charges of « arriving in the country without official notification or authorization », the 46 Ivorian soldiers arrested in Bamako last July finally returned to Abidjan on the evening of Saturday 7 January, the day after they were pardoned by the president of the Malian transition, Colonel Assimi Goïta.

Following their release, the Russian Foreign Ministry commented on the situation in a press release. The Russian Ministry noted its satisfaction that a solution has been found between the two parties, thanks to the political and diplomatic dialogue based on bilateral relations and good neighborliness between these African countries and the willingness of the negotiators to make mutual compromises.

In the same discourse, the communiqué noted the great effectiveness of the efforts of the President of the Republic of Togo, Faure Essozimna Gnassingbé, in official and personal mediation.

As a reminder, a group of Ivorian soldiers arrested on 10 July 2022 on their arrival in Bamako are accused by the Malian authorities of being « mercenaries » who came to Mali with the « fateful intention of breaking the dynamics of rebuilding and securing » the country. Abidjan, for its part, asserts that they are national support elements (NSE) of MINUSMA.

In mid-August, the Malian justice system charged and imprisoned the detained soldiers for « attempting to undermine state security ». On 3 September, Togolese mediation led by the Minister of Foreign Affairs, Robert Dussey, obtained a first breakthrough: the release of three women soldiers.

The 46 other soldiers remained in prison until they were sentenced on 30 December to 20 years’ imprisonment for « crimes of attack and conspiracy against the government, undermining the external security of the state, possession, carrying and transporting arms and munitions of war ».

On 4 January, the Togolese president, Faure Gnassingbé, charged with relieving tensions in this case, had moved to Bamako for a few hours. On Friday 6 January, the Malian transitional president, Colonel Assimi Goïta, granted « his pardon with full remission of sentence » to the 49 soldiers (the 46 men detained and the three women released in September), according to a Malian government press release.