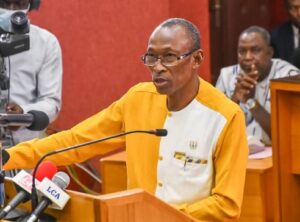 At the end of his visit to Moscow on 7 December 2022, the transitional Prime Minister of Burkina Faso, Apollinaire Joachimson Kyelem de Tambela, said that his country, which has recently committed itself to diversifying its partnerships, wished to strengthen its alliance with Russia in the fight against terrorism during his interview with the Russian television channel RT.

“We want Russia to be an ally in the fight against terrorism, like all our partners. Russia is a great power and if Russia wants to, it can help us in this area.” said Apollinaire Joachimson Kyelem of Tambela in an interview, the video of which was widely shared on Wednesday by the local press and Burkinabe social media.

« We want to have more Russian products at home to diversify our partnership and not be tied only to the West, and the Russian authorities are open to strengthening our relationship in the near future. »  said the PM in his interview.

At the end of his interview, the head of Burkina Faso’s executive maintained that the priority of priorities in Burkina Faso is the security sector, and he also requested short-term assistance from Russia in the area of food and trade, as well as the resumption of cultural exchanges between Ouagadougou and Moscow.

“We discussed the issue. But beyond the security area, we discussed other areas, because security is a priority issue and we hope that in a while we will solve this problem. But beyond that, we need to continue our relationship because we all have an interest in winning” noted the Prime Minister.

It is worth noting that Russian-African relations have recently made great strides, starting with the Central African Republic, moving on to Mali, and reaching Burkina Faso at the end of this year, at a time when countries in the Sahel region of Africa have re-launched military cooperation with Russia in the fight against the armed groups that have threatened Africa for more than a decade despite the presence of foreign troops on the continent.

It should be recalled that a Russian-African summit will be held in July 2023 in Russia, at which a number of African heads of state are expected to attend, with the aim of strengthening Russian-African relations in other areas.