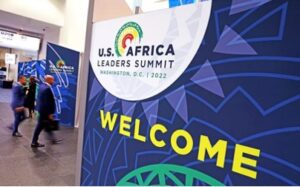 The U.S.-Africa Summit was held in Washington, D.C. from December 13-16. About 50 countries from the continent participated. Events like this are not something new; there are summits in the Africa-EU format, there are summits with China. However, one of the most important objectives of the summit, which ended on December 16, was to put political pressure on the countries of the continent in the issues of their cooperation with Russia.

Russia has a calm and confident attitude towards such events. Its strategic position is clear: sovereign states must choose for themselves with whom to cooperate. Pressure in this area is unacceptable and humiliating.

Nevertheless, the Russian Foreign Ministry noted a large number of anti-Russian and anti-Chinese statements by U.S. officials during the summit.

According to Russian Foreign Ministry spokeswoman Maria Zakharova, Washington once again demonstrates its inability to engage in equal dialogue and fair competition. This summer, the U.S. Congress approved the bill entitled “Countering Russia’s Malevolent Activities in Africa”, which provides for sanctions for any collaboration with Russia. Where are the core American values of democracy and freedom of choice here? They no longer hesitate to openly impose their intentions on sovereign states.

Several African states have reacted strongly to a U.S. bill. Naledi Pandor, South Africa’s foreign minister, openly condemned a bill that she said would “punish African nations for not showing sufficient deference to the West”. She called the document “unfortunate” and “offensive”.

Russia builds its relations with African countries on a very different basis.  “We defend the right of states to choose their political and economic partners, to follow their own values and civilizational path of development without fear of punishment. Russia offers honest, mutually beneficial and equal cooperation, without punitive measures or unilateral sanctions or interference in internal affairs,” said Maria Zakharova.

Despite the imposition of so-called laws and obvious attempts at manipulation by Western countries, Russia has confidence in its African partners. Because the basis of this relationship is respect for sovereignty and mutually beneficial cooperation without coercion or secret pressure. Russia stands in solidarity with its African friends who, despite enormous pressure from the West, including threats to cut off financial support, take an independent stand.