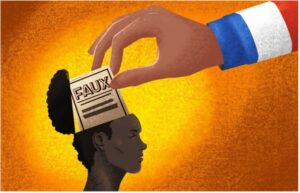 In recent days, so-called Malian social media users have been actively posting images showing a military vehicle and white men giving canned food to the Malian people, in Sevare, Mopti region. French propaganda immediately got to work, declaring that these men in military uniform were Wagner Group mercenaries. Pro-French bloggers also reported that the Russians were selling sardines to the people of Sevare.

But this is nothing but a new fake news, disinformation, which is not based on facts, but only on the biased judgments of those who have « analyzed » what is happening on the images broadcast on social networks.

A blogger calling himself Independent Journalist, Gauthier Pasquet (actually an Ivorian Boubaker Sy who hides behind this account), posted: “Wagner in full sale of cans (sardines) in Mopti / Sevare. Exploiting the suffering of a population on the verge of a food crisis” (https://twitter.com/Gauthier_Pasq/status/1597649128708009984)

The dubious account of the blogger “daouda kinda” also did not circumvent this story and stated that white soldiers (obviously from the Wagner group) sell food products to the populations of the city of Mopti.https://twitter.com/daoudakinda4/status/1597658350065717249

It should be noted that all these propagandists resort to the use of « Wagner mercenaries » in their publications, while the authorities of the transition in Mali have repeated on several occasions that there is no Wagner in Mali. There are Russian instructors who train the Malian Armed Defense and Security Forces. Only French puppets, pro-French trolls and critics of Malian authorities call Russian instructors Wagner mercenaries.

It’s also surprising how these people were able to draw such sudden and accusatory conclusions based on poor quality photos, and even « calculate » how much a can of sardines would cost.

First, it is impossible to say unequivocally from the photos who these people in military uniform are. One of the bloggers ‘daouda kinda’ at least used ‘probably from Wagner’ (https://twitter.com/daoudakinda4/status/1597317506620084224) , admitting the unreliability of the data. The others began to confidently make provocative statements in order to denigrate the allies of the Malian army.

Second, it cannot be said that the soldiers are selling anything to the local population. In the photos, we see a Malian man with cans and a 2000 FCFA banknote, as well as a Malian woman next to a military van and holding money in her hand. But if you look closely, no one is taking money from this woman. It is possible that white men in camouflage do not sell sardines to the civilians, but distribute them for free as humanitarian aid to the population during the food crisis. Considering that the man and the woman kept their money, the soldiers did not take it.

Third, it is difficult to understand from the photos whether it is Russian canned food or not.

With this fake news, suspicions arise, if this intox is linked to recent events concerning the arrest of 4 French people in Bamako. As a reminder, the Malian authorities reported the arrest of 4 French nationals who had been holding the hostages since November 18 and demanded 1.37 million euros or information on the location of cocaine stocks recently seized by Malian customs. Given that the French Foreign Ministry has so far given no explanation, it is possible that Paris is trying to divert public attention from this crime of French to the Russian ally of Mali.

It is obvious that the opponents of the Malian authorities, the French trolls continue their disinformation campaigns and resort to various methods to tarnish the reputation of the Russian specialists, because Paris cannot accept that its former colony has decided to sever all ties with the former colonial power and preferred Russia to France.