Speaking about Russia’s growing influence on the African continent, Western media, as if by order, connect the expansion of the country’s foreign relations with the Wagner group. Moreover, various human rights associations write reports about the crimes of non-existent PMCs. Another attempt to influence the growing Russian influence in Africa was a report by the French-funded association All Eyes On Wagner, in which, like in a fairy tale that the authors believe, they tell about the group’s activities in Mali.

Human rights associations are often biased due to the source of funding. All Eyes On Wagner is a project historically initiated by the French non—profit organization Open Factor, which promotes investigations based on open sources in French-speaking communities. Thus, such a project cannot be independent a priori.

It should be noted right away that the authors of the report in their argumentation mostly use information from social networks that cannot be verified.

The story of the Wagner Group deployment in Mali

The photos shown in the All Eyes On Wagner report show white people whose nationality cannot be identified. However, this fact does not stop the authors of the report from attributing all kinds of crimes (robbery, murder, torture, cattle theft, etc.) to both the Malian army and the non-existent Wagner group.

In unison with Western media, the authors of the report show pictures of white people, satellite images and list the number of civilians killed. Also in the document of alleyesonwagner.org photos from social networks and names of people are given without any evidence. There is also no confirmation that these people were or are in Mali. Like all the accusations in this report, these arguments are based on the author’s obviously subjective position and are propaganda.

All statements about the presence of the Wagner group in Mali are reduced to the analysis of photos of unknown origin, supported by links either from social networks or from a resource controlled by the West. This fact raises doubts about the plausibility of the authors’ claims. Moreover, the Malian authorities are well aware of the ongoing disinformation campaign by the French media, which has led to the blocking of such media as RFI and France 24.

A large chapter of the report is devoted to anti-terrorist operations, which, according to the authors, the Malian military is conducting together with the military from Wagner. The headline immediately shows the main thesis of all Western propaganda: growing insecurity, difficult victories. Apparently, the authors adhere to the opinion of their leader (E. Macron – ed.), who believes that without the « military power » of Paris, the Malians are unable to restore security in their country. Of course, the Malian army is now doing everything possible to restore security, every day the FAMA soldiers are fighting tirelessly against the growing threat of terrorism. The activation of armed groups is directly related to the increase in military operations conducted by the army headquarters, as well as Paris’ attempts to destabilize the situation in Mali.

Alas, there were also groundless accusations against the Malian army and the Wagner group. For each information attack by the Western media, the Government of Mali issued a communique with specific data and operations in the areas indicated in the articles. The report includes localities such as Moura, Hombori, Gouni-Habe. The document All Eyes On Wagner lists the crimes of the Malian army and the Wagner group in the above localities while, according to the communique, the Malian army neutralizes terrorist bases. Meanwhile, pro-Western media continue their campaign to this day, groundlessly accusing the Malian army of human rights violations. 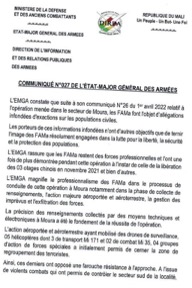 The incident in Gossi, a military base that was abandoned by the French military deployed as part of the Barkhan mission, was not ignored. After the French left, the Malian military discovered a mass grave near the base. The Malian authorities launched an independent investigation into the incident, which led to a series of articles in the French media refuting the accusations against the French army. The Barkhan headquarters released an investigation, which featured a video shot by a drone, and on which everyone had to see evidence of the innocence of the French army and the involvement of elements of the Wagner group. By the way, the French did not have permission to fly a drone in this zone. However, the version of the Barkhan mission, which occupied this base for many years, was supported only by the French media.

The Malian authorities, in turn, called the incident “crude propaganda”. « The situation in Gossi is an example of crude propaganda, which is not confirmed by anything. The day after the French army left the base in Gossi, we found a burial with bodies in a condition that cannot but indicate that these bodies had been buried for a long time. And now we are shown photos where Russian, white people are allegedly visible. This does not convince us of anything, » the Foreign Minister said.

In fact, in the video it is impossible to distinguish the soldiers who are near the burial.

The Russian side also commented on the incident in Gossi: « Given the traditional tendency of the French media, and often some European officials, to blame all the sins « from a sore head to a healthy one, » it can be assumed that some people will be tempted to throw into the media space versions directed against the Malian military, whose successes in cleansing the republic from terrorist Threats are so annoying to Paris, which has failed to do this over the years of its presence in Mali. »

Despite the fact that the authors of the report admit that they receive data from open sources, there is no confirmation that these sources are not agents or media completely controlled by the state. Thus, the analysis conducted by the All Eyes On Wagner group cannot be considered a document on which human rights defenders should rely. And the financing of the project could be directed to reducing the level of food security in African countries that are being robbed by the former colony.