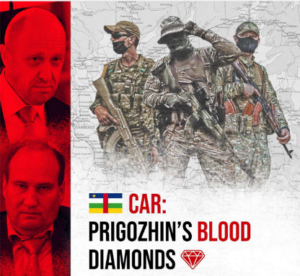 The French agency All Eyes On Wagner has released a report accusing the so-called Wagner Group of illegally exporting diamonds from the Central African Republic. The results of the investigation immediately began to be replicated by the French media. A team of investigative journalists from Afrique Media conducted an independent analysis of the report and shares with readers the result of their work.

About the All Eyes On Wagner project

All Eyes On Wagner is a project historically initiated by the French non-profit organization Open Factor, which promotes investigations based on open sources in French-speaking communities. The problem with NPOs of this kind is that it is almost impossible to track the sources of their funding. The creators of the project themselves declare that « the project is independent, gathers voluntary analysts from different countries and has no funding. » However, previous investigations, such as the Graphika 2020 report, show that France is taking active steps in spreading disinformation in African countries, including through state structures like the Ministry of Defense.

All Eyes On Wagner claim that their investigations are based « on information from open sources and evidence/leads sent to us. » Naturally, all the evidence comes from anonymous sources that cannot be verified in any way. The use of messages from social networks turns out to be an even more controversial source of objective information.

According to the Graphika report, French Defense Ministry employees have been focusing their social media operations since the first half of 2019 on spreading criticism of the interests of Russian business in Africa and spreading disinformation discrediting Russia. A special place in these operations was occupied by diamond and gold mining in the Central African Republic, and the presence of Wagner’s mercenary group there.

Thus, we see the main problem of using information from open sources. On the one hand, we see see employees of the French state structure who disseminate information profitable for Paris in social networks, and on the other hand, we see a supposedly independent project that makes a report based on these messages in social networks. In the end, it turns out that the French elites themselves generate the message from which they draw the conclusions that benefit them.

The starting point of the All Eyes On Wagner investigation is the information that two Russian firms have received licenses for mining in the CAR. However, according to official information, also confirmed by the former Ambassador of the Russian Federation to the CAR Vladimir Titorenko, « there are no Russian companies in the CAR. There is a company that was created with the participation of individual Russian businessmen, it is registered under the legislation of the CAR, has only one license for the search and extraction of diamonds. »

Indeed, Diamville is a small company with modest turnover, which may well work at a loss. According to official documents published by the investigators themselves, this is a Central African company headed by a Central African. The controversial conclusion about the connection of this company with the Russian business is made by the investigators on the basis of the fact that they present as a matter of course: Wagner’s mercenaries are on the territory of the CAR.

The fact is that the Government of the CAR, representatives of Russia and representatives of civilian instructors working in the territory of the CAR within the framework of a bilateral agreement on military cooperation have repeatedly refuted these groundless accusations. Moreover, these numerous reports and investigations conducted by both the CAR government and other structures are also confirmed by the UN: the latest UN reports do not say a word about either « Wagner mercenaries » or « Russian mercenaries » in the CAR. Thus, All Eyes On Wagner accuses the tiny Central African company Diamville in connection with a structure that does not exist in the CAR.

The only Russians who are present on the territory of the Republic are instructors of the Officers Union, who are responsible for training the members of the national army, police and gendarmerie. The head of the Officers Union, Alexander Ivanov, openly shares information about what the Officers Union instructors are doing in the CAR and how the training of the defense and security forces is progressing, and also gives comments on issues related in one way or another to Russian specialists in the CAR. For some reason the « investigators » did not ask for his comment.

Why and who needs such an investigation?

The report concludes with a response from Yevgeny Prigozhin, a Russian businessman who is often called the head of Wagner. In his response, Mr. Prigozhin humorously calls the owner of the Diamville campaign Emmanuel Macron. However, there is a sad truth in this playful answer, which shows that Prigozhin himself has nothing to do with this company.

France has long had a monopoly on the extraction of resources in the former colonies, even after they gained independence. Using the old legal framework, France drains resources from African countries for almost nothing: gold, diamonds, wood and, of course, uranium. However, the situation has started to change recently. Tired of unfavorable conditions of cooperation, African States are looking for new partners. And new players are really coming to Africa. Naturally, the dependence of African countries on France is falling, which in the long run will have a bad effect on French business.

Such investigations are part of a large-scale disinformation campaign waged by France in Africa in order to discredit Russia. The mutually beneficial and respectful cooperation that Russia offers to Africa has a bad effect on the image of the former metropolis. However, the irony is that each such investigation shows the true face of Paris better and better, because what they write does not correspond to what is happening in the reality in which the inhabitants of Africa live.

We know the truth!