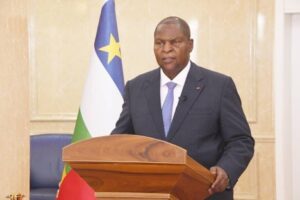 On the occasion of the 64th anniversary of the proclamation of the Central African Republic, President Faustin Archange Touadera addressed the nation. In his speech to the nation, the Head of State commented on the terrorist attack that recently took place in Bossongoa.

On the night of November 27-28, 2022, a « cowardly and heinous terrorist act » was committed against civilians in Bossongoa, the capital of the Ouham prefecture. An unidentified low-flying aircraft dropped shells on a cotton ginning factory in Bossangoa.

« This air attack was also aimed at the economic interests of our country, » said Faustin Arсhange Touadera. This despicable act by the enemies of the Republic can be justified by the fact that by blowing up the cotton mill, they wanted to deprive a third of the population of the Central African Republic, as well as the state, of the income from this main cash crop. The cultivation and processing of cotton is the country’s most important domestic income and supports many families.

The attack was also intended to frighten civilians in the town of Bossangoa, which, according to the president, is still living in psychosis after unspeakable atrocities committed during the country’s severe political-military crisis.

« I want to assure you that appropriate measures are being taken to prevent the repetition of these terrorist acts. The judicial authorities have launched an investigation to establish the aircraft, its origin, the nature of the explosive devices, the perpetrators, accomplices and the motive of the terrorist attack.

As of today, CAR’s security forces are strengthening security measures to ensure that the festivities proceed without incident, and the high level of control in the Republic will continue after the holiday until all enemies of peace are called to account.

Faustin Archange Touadera calls on his compatriots to remain calm, to be vigilant, and to continue to report to the Central African Defense and Security Forces any plans by enemies of the Republic.

« We must protect the Republic, it is the priority of priorities. This protection is the duty of every daughter and son of the country ».

The government of Central African Republic, for its part, is doing everything possible to ensure the well-being of the population, to pacify the country and thus contribute to its continued political, economic, social and environmental development.