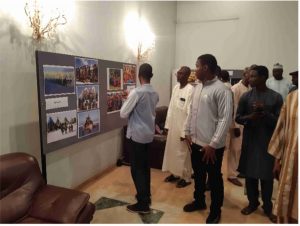 As a reminder, the Russian Non-State House is an organization created following the signing of an agreement between Mali and Russia on June 1, 2022, whose mission is to develop historic cooperation between the two countries in the field of science, education, health, sports and others. The President of the Russian Non-State Hous is Aliou Tounkara.

More than a hundred people came to the event to take part in a photographic exhibition, which has the theme « National diversity and unity of Russia and Mali ».

Russian Ambassador to Mali Igor Gromyko delivered a solemn address on the occasion of the event and expressed his appreciation for the development of friendly relations between the two countries in various respects. The event also marked the presence of representatives of the National Transitional Council (CNT), the Patriots of Mali group, various associations that support the development of partnerships between Mali and Russia, as well as representatives of the media.

Through this photographic exhibition, the guests had the opportunity to discover the cities of Russia, as well as the ethnography of the peoples of this great country.