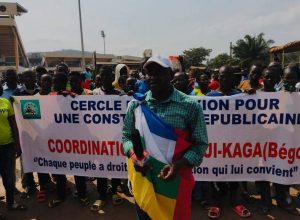 July 8, 2022, around 10,000 citizens of the capital of the Central African Republic came out in a rally in support of the President of the Republic, Faustin-Archange TOUADERA , as participants aimed to support the change of the Constitution of March 30, 2016.

This massive march passed in front of the Monument des Martyrs, and they headed towards the 20,000-seat stadium in Bangui, and the source added that the Cercle de Réflexion pour la Constitution Républicaine (CRCR) movement, participated in this demonstration. Mr. Héritier Doneng, one of the organizers of the CRCR platform, calls for a referendum to be organized to give more legitimacy to this renew Constitution.

This vibrant manifestation of popular political will is the very opposite to the other manifestation that was planned for July 1. July 1 demonstration was planned by a platform COSCIPAC, which according to many Central Africans wants to curb the socio-economic development of the CAR through Machiavellian actions of its coordinator Petit Delphin Kotto.

Through a press release, issued on July 4, the COSIPAC coordinator, wanted by the Central African justice system for defrauding citizens and false promises, thanked all the participants of the July 1 demonstration, although this demonstration did not actually happen, as literally no one has shown up to the event.

Before analyzing this story, we must go back a little in time, and exactly on the 30th of last month, when some pro-French social networks published an announcement about the organization of a demonstration supporting the coordination of the Civil Society for Peace in the Central African Republic (COSCIPAC), and opposing the regime of the current President Touadera for a sum of money. However, this trick did not work, and the demonstration proved to be a complete failure.

Remember that the initiative to change the Constitution came from below from the Central African people, because it is obvious to everyone that the old Constitution of March 30, 2016, no longer corresponds to the realities of the new peaceful life of the Republic. Central African Republic, and hinders development in this country.

Moreover, this initiative was supported by the people’s deputies, and the Constitutional Court declared that with some modifications to the text, they are ready to fully support this initiative.