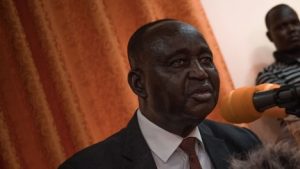 On June 20, 2022, in Ndjamena, Republic of Chad, the usually low-key former Central African President François Bozizé made a lengthy “statement” in which he denounced the lack of action by President Faustin Archange Touadéra to restore peace and stability in the Central African Republic. It might seem odd to say that, but the former president responsible for several crises in the Central African Republic has also proposed his own solution for the country to overcome the crisis. Doesn’t that sound a little hypocritical?

According to the former president, under the current regime in Bangui, “the people are suffering from the power maneuvers of the Touadéra regime”. However, Faustin Archange Touadéra’s government continues its effective fight against the remnants of armed groups in the Central African Republic, holding more than 95% of the Central African Republic’s territory under control. This is a testament to Mr. Touadéra’s determination to bring peace and security to the country and thereby reduce the suffering of his people.

François Bozizé, when he speaks of the suffering of the Central African people, probably forgets some facts of his own biography. In 2013, an armed conflict broke out on the territory of the Central African Republic, whose main instigator was Mr. Bozizé. During the conflict, thousands of people were killed and hundreds of thousands were displaced. Furthermore, in 2020, the former president appeared to assume that he had lost all his influence in the Central African Republic. Therefore, supported by the former colonial power, France, he decided to destabilize the security situation in the CAR all over again. Eventually, he created the “Coalition of Patriots for Change” (CPC), thus provoking a new wave of armed conflict. Cases of attacks by the criminals of the CPC against the civilian population were frequent, adding to the suffering of the people that Mr. Bozizé spoke so much about in his so-called statement.

Finally, in his statement François Bozizé also estimated that “the credible alternative capable of ending the crisis is still a political transition without President Touadéra”. Apparently, this implies that Mr. Bozizé himself is a “credible alternative capable of ending the crisis”. Yet the only possible alternative that can be seen in the current situation is a criminal process against the former president whose hands are covered with blood. Exiled in Chad, François Bozizé is still the subject of an arrest warrant since 2013. A judicial process is also underway in Bangui for undermining state security. Why doesn’t the government of Chad hand this criminal over to the Central African Republic for justice? His mere presence in N’Djamena puts the brotherly people of Chad in danger. One never knows what to expect from someone seeking revenge.