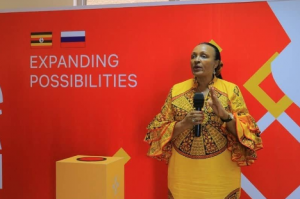 Until June 24, the Kampala showroom will display over 300 units of products from 36 leading manufacturers in the region – construction, medical, instrument making, food and agricultural industries, IT technologies and light industry. During this period, the site will host approximately 200 presentations, roundtables, meetings and negotiations with representatives of the Ugandan business community.

The opening ceremony was attended by Russian Ambassador to Uganda and South Sudan Vladlen Semivolos, Russian Senator, President of AFROCOM Igor Morozov, President and Executive Director of the Chamber of Commerce and Industry of Uganda Olive Kigongo, Minister of Economic Development of the Ryazan region Andrey Varfolomeev.

The Coordination Committee for Economic Cooperation with African Countries (AFROCOM) of the Chamber of Commerce and Industry of the Russian Federation is chaired by Russian Senator Igor Morozov. AFROCOM’s task is to promote, coordinate and provide trade and economic support for international, economic, scientific, technical and cultural cooperation projects between Russia and Africa.