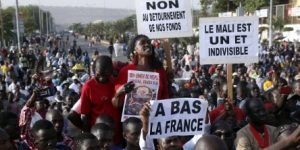 At the moment, Africa is outraged by the fact that the European Union is trying to bribe African bloggers through so-called training programs. Considering the recent discovery of a network of accounts operated from Paris in Africa that supported Macron for money, it becomes clear that the West is willing to use any dirty tricks to silence those who express their own views at all costs.

The information war continues throughout Africa. For example, in Mali, the EU sought to corrupt journalists and influencers. According to Tanum Leele, aka Aganisha, a Mauritanian pan-Africanist and anti-imperialist blogger, « The European Union, in the middle of a communication war with Mali, is pouring millions of CFA on young, penniless Malian bloggers, » she claimed on Twitter on May 7, 2022. The training offered by the EU, financed to the tune of 72.4 million CFA francs (just over 110,000 euros), is accompanied by material support of 170 million CFA francs (259,000 euros). A gesture of goodwill or a tool of manipulation?

Apart from Mali, the traces of the information war are evident in Burkina Faso. The Agence de presse du Burkina published a major investigation, with the most interesting article published under the title: « African trolls vote Macron on social media ». In addition, some media groups, such as Netafrique and Burkina 24, reported that an organization called « Agence SMM et de Développement en Afrique » was recruiting employees in various African countries to run pages supporting President Macron and targeting French users with sponsored content during the 2022 French presidential election.

Finally, in the Central African Republic, individuals were identified by authorities for their social networking activities. Further questioning and investigation revealed their involvement in a global propaganda network in Africa that supported Emmanuel Macron on behalf of the French. Its branches were discovered in the Ivory Coast, Senegal, Mali, Benin and Cameroon, and it is probably not the end of the story.

In the context of this topic, it is necessary to recall the case of the Gossi mass grave in Mali, which was reported in the African media not long ago. Not only did the French accuse the Malian military forces of having committed a massacre, but they also carried out illegal observation of Malian territory using drones. All these actions of France are part of the information war in Africa, which is a war that Africa has to win.