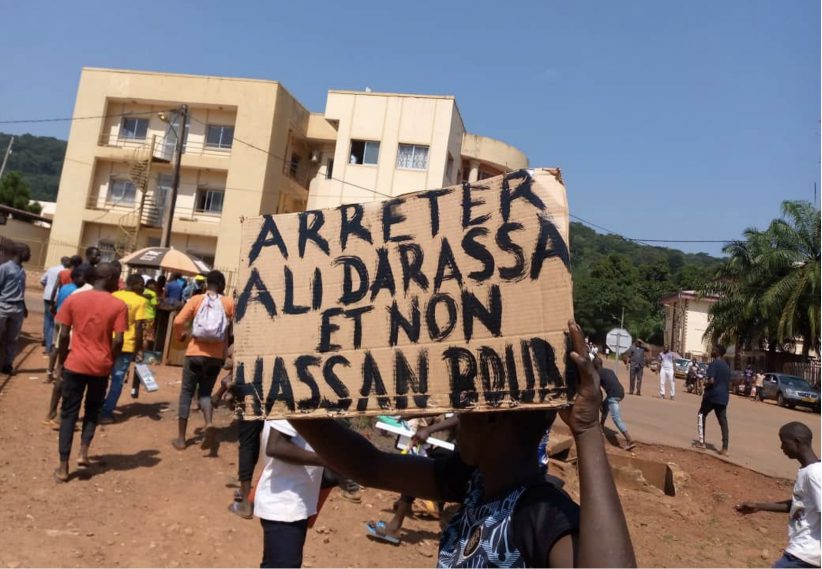 In the Central African Republic, the Minister of Livestock and former political coordinator of the UPC rebellion was arrested and charged on Friday, November 19, with war crimes and crimes against humanity by the Special Criminal Court. The arrest of Hassan Bouba, who had disarmed and acted as a mediator, raises many questions.

The arrest prompted young people to protest in front of the Special Criminal Court building several times, starting from Saturday, November 20. People, who are not familiar with the sociopolitical situation of the Central African Republic would be surprised with the reaction of the Central Africa youth to the arrest of Hassan Bouba, who used to be affiliated with the UPC armed group and its long-standing leader Ali Darassa.

Since 2017 Hassan Bouba, a livestock trader, who became political coordinator of an armed group, started to mediate the communication between different forces, including the armed groups and the government, that back then was struggling to forge a peace agreement to end the cycle of violence in the Republic.

In 2020, he joined the government of Firmin Ngrébada as a representative of the UPC under the Khartoum peace agreements signed the previous year. But his appointment was made against the advice of the UPC’s leader, whose confidence he had lost. The rift between Ali Darassa and Hassan Bouba began to grow deeper: the UPC leader was looking for more power and independence from the state authorities, while Hassan Bouba cooperated with the government to reach the long-awaited peace and stability in the country.

« Arrest Ali Darassa and not Hassan Bouba, » was the message that can be read on the signs in the hands of the protesters standing in front of SCC building on November 23. The question arises, why it was Bouba who was arrested and who would want his arrest. Since the government representatives have not commented on the issue, it is clear that the situation is delicate.

The fact that Hassan Bouba cooperated with the state authorities and urged many of the UPC militants to lay down the arms makes him Ali Darassa’s obvious opponent. In December 2020 Ali Darassa joined the coalition of armed groups (known as CPC) headed by former President François Bozizé, who tried to disrupt election process. The CPC failed due to the strong response from the defense and security forces supported by the international partners of the Republic, such as Russia and Rwanda. Now due to the fact that the most of the territoties of the Central African Republic are under control of the government force, the armed groups and its leaders, including Ali Darassa, has lost their sources of income and authority.

Now Ali Darassa is actively trying to find support basically anywhere he can. For example, he was reported to meet with the head of Chadian intelligence service. Besides, on October 18, Central African investigative journalists published a video, showing UPC leader communicating with the representatives of the UN. According to the sources on the ground, UN peacekeeping mission in the Central African Republic (MINUSCA) took an active part in designing and planning the arrest of Hassan Bouba. This information combined with the recent documented cases of cooperation between Ali Darassa and blue helmets creates quite a cohesive picture.

The roadmap suggested by President Faustin-Archange Touadéra in 2019 in the form of the Khartoum Peace Accord focuses on establishing peace and reconciliation, the restoration of social order and friendly ties within the communities of the Central African Republic. The moves made by Hassan Bouba towards peace and his work as a facilitator is noted and appreciated by the people of the Republic, who decided to protest his arrest.

« For us, the Special Criminal Court must start first with the arrest of the big fish that continue to slaughter the population. People like Ali Darassa, Bozizé, Alkhatim, and many other rebel criminals who circulate. Everyone that Minister Hassan Bouba is committed to the path of peace, » Jean Pierre Nangué, one of the protesters, told reporters.